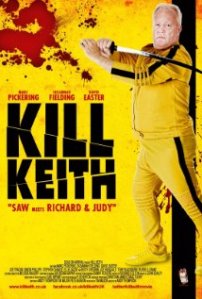 You may like this if you liked: Food poisoning, having an amputated limb with no anaesthetic, having a television land on your head.

Keith ‘Cheggers’ Chegwin is (apparently) a national treasure, and when the presenter of popular morning TV show Crack of Dawn (hilarious) quits the show, he is on the short list to become the new presenter. However, events take an unexpected turn as those on the shortlist, including Joe Pasquale, Tony Blackburn and Russell Grant (all gratefully accepting the pay check and playing themselves) start being killed by the ‘breakfast cereal killer’. Spoiler alert: This is the funniest joke in the film.

Firstly, I feel it is important to explain why I watched this. Some may call it naive, I prefer to call it an open minded optimism in British cinema, though if you called it pure stupidity, in hindsight I would struggle to disagree with that one. Sometimes a British film comes along and it looks a bit crap; however there is some charming Brutishness about it that only we British (the inventors of the sense of humour) actually get. If you then throw in some well known names playing themselves and willing to make a fool of themselves, you can have as a result an unashamedly self referential allegorical satirical take on society that maybe has a niche market, but is actually trashy but quite enjoyable.

However, Kill Keith is none of these. This is the most embarrassingly and painstakingly awful film I have seen recently. Usually I can find redeeming features in most films (see my St. Georges Day review), however, in this case I cannot. There is nothing funny, entertaining or redeeming about this film. I know those previously mentioned are not exactly big names, but do they not have any self respect?!?

Keith himself did Channel 5’s Naked Jungle so should surely know better by now, but even after his excellent “Jews and queers” cameo in Extras should not feel the need to do this. The apparent comedy involving the protagonist Danny (Marc Pickering) is not funny and just cringe worthy and embarrassing. Pickering himself seems to give a decent effort but his character is not even likeable, just plain irritating. As the god awful ‘hilarious’ plot develops you will simply want to punch yourself in the head, it is physically impossible to laugh either at or with this film, it is just purely awful. It is beyond me how this tripe ever got funded, and I am pleased that it made no money.

In summary, there is no words to describe how unbelievably appalling Kill Keith is, 90 minutes sat on the toilet staring at the ceiling would be a more productive use of time!