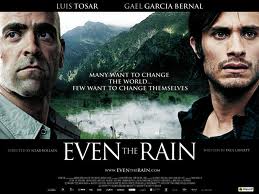 A passionate director Sebastián (Bernal), his cynical producer Costa (Tosar) and the rest of their Spanish film crew travel to Cochabamba in Bolivia to make a revisionist epic about Christopher Colombus’ discovery of America. Sebastián’s vision is to show the Spaniard’s rough treatment of the natives as they attempted to ‘civilise’ them. Costa simply chose Bolivia because of the tax breaks and the fact that they can recruit local residents to be in their film for next to no money. The filming is suddenly under threat as there are local protests from the starving locals over the oppressive privatisation of the water supply. Sebastián and Costa find themselves involved as one of the pivotal native characters in the film is leading the protest and the oppression of the Bolivian locals mirrors the oppression of the Indians in their film.

I know this film is a little old, but after seeing excellent performances from Bernal and Tosar in No and Sleep Tight respectively, I then saw this and was very intrigued so added it to my Lovefilm list. Films within films are always a tricky one and can often become a little over indulgent and smug, such as Seven Psychopaths. Thankfully, Even the Rain does not fall into this trap, working on many levels and all told with heartfelt honesty and humanity.

The parallels between the film they are making and what is happening around them never feels contrived or clichéd, as it is dealt with in a subtle and cautionary way. However, Even the Rain is essentially a very human film. The situation is very real and all the characters, both Spanish and Bolivian are presented demonstrating all the compassion but also flaws that we all have. Bernal and Tosar are both excellent as the two contradictory characters, but they actually compliment each other very well. As their characters become involuntarily involved in what is happening around them the decisions they are forced to individually make are very human and believable decisions faced by many people all over the world.

The supporting cast of both the Spanish actors and oppressed Bolivian locals all give excellent and human performances that evoke genuine sympathy as we are forced to place ourselves in what is a very real and believable situation. As the drama develops and intensity increases it is very engrossing and involving. With a story like this there is always a risk to fall into the traps of cliché or over sentimentality, thankfully all plot developments feel very real and natural, leaving a conclusion that will not disappoint.

Even the Rain is a gripping, involving and very human drama that grips till the very end, avoiding all the predictable clichés of any similar Hollywood drama.