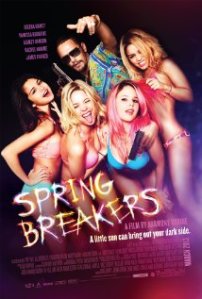 Brit (Ashley Benson), Candy (Vanessa Hudgens), Cotty (Rachel Korine) and Faith (Selena Gomez) are all College students disillusioned with college life. They plan to go to the extremely hyped Spring Break but do not have enough money. They commit armed robbery at a local diner (as you do) to pay for it. Once there the girls have a fun and frantic sex, drugs and drink fuelled holiday beyond their wildest dreams. Unfortunately they are arrested and subsequently bailed out by a local rapper and dealer by the name of ‘Alien’ (Franco). Faith wants nothing to do with it and returns home, but the other three are more than happy to immersive themselves in Alien’s extreme world of drugs, guns, sex, excessive wealth and Britney Spears ballads.

If ever there was a ‘marmite’ film of recent times it has to Spring Breakers some say it is trashy rubbish, and others say it is intentionally trashy and a satirical depiction of the shallowness of teenage life. The fact is that if you want a film to mean something then you can find the evidence to prove that. If you are determined to find irony or satire in a film then you will find it if you look hard enough. The only person that knows what exactly Spring Breakers is about is Harmony Korine and I doubt he will ever actually truthfully tell us. So it is up to everyone else to have a theory and all be pleased with themselves for ‘getting’ it. This may well be why Spring Breakers has made quite a bit of money. That along with the fact it has former Disney stars in it wearing bikinis, which in itself could be some satirical irony. Oh God! I am doing it now!

The undeniable fact is that Spring Breakers is a poorly made film. The dialogue, acting, editing and story structure are all pretty awful and amateurish. Though apparently if you read some reviews this is all intentional to prove a point. Fine, but then how the hell is anyone supposed to review or criticise this thing? Is this the cleverest film ever made and Harmony Korine is suddenly a genius?!? Well, for me Spring Breakers is actually quite uneventful overall. For me this is a very unique film and quite a trip, but not in a good way. Surely that was not intentional too? Korine struggles to fill 90 minutes and the constant repeats of the same shots or same montages that were simply stolen from Piranha 3DD add nothing but frustration. They may have made their point the first time, but fifth time round is just plain annoying. The repeated montages and James Franco repeatedly murmuring “Spring Break” just get incredibly irritating and make this film actually quite dull.

Is it some kind of clever social commentary? Well, the fact is that anyone who has knowledge of the world today will not be shocked by anything they see here, mildly irritated perhaps, but never shocked. I find it impossible to believe there is any intelligence behind this film.

There is a definite attempt at character arcs here with the four girls, proving to me that there must be some kind of attack on youth culture within the narrative. The editing and sound also show a sense of purpose from Korine. The repeated voiceovers, jump cuts and trippy music are all very effective at mirroring the ecstasy and trance like state of our characters.

When James Franco turns up then the (kind of) plot takes over and he is solid, but his character is an extremely clichéd caricature that is hard to take that seriously never mind find him menacing. Suspension of belief is also crucial as some of the acts the girls commit are unbelievable and ridiculous reminding you that this is fiction. For me it is these ridiculous things that take away any shock factor and truly dilute any real satirical attack. They produced a neutral feeling to both the characters and the film overall. Would normal bored college girls really commit armed robbery to pay for a holiday? I don’t think so. The final scene is even more ridiculous in terms of the girl’s transformation and just simply unbelievable. It is this final third that for me Spring Breakers became more ridiculous fun than biting satire. In the first two thirds I did hate these characters and therefore the culture they were part of. However as soon as they start doing some of the more unbelievable things they do in the final third these undermine any serious points this film was potentially trying to make. I found there were some serious mistakes in terms of plot decisions in the final third that undermined any potential moral messages. I understand that extreme examples can be used to really emphasise a point, but there are limits and I found the ending a misfire if it was trying to make any real serious point.

There is no doubting that Spring Breakers is a unique trip that is worth a watch with some great visuals, but in my view not as memorable or as shocking as Korine wants you to think. The visuals are effective but let down by some bad plot decisions in the final third. It can mean whatever you want it to mean but you don’t actually learn anything new, therefore producing an overall neutral feeling and quite hollow experience.