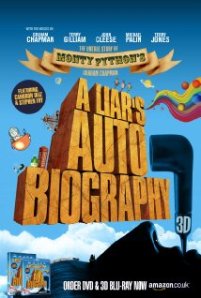 You may like this if you liked: The Meaning of Life (Terry Jones and Terry Gilliam, 1983), Yellow Submarine (George Dunning, 1968), Monty Python and the Holy Grail (Terry Gilliam and Terry Jones, 1975)

Involving all the surviving Pythons except Eric Idle, this is a completely animated story of the life of Graham Chapman told in a slightly off beat digressive and exaggerated way. Narrated by Chapman himself using audio tapes that he recorded before his death in 1989, this is essentially a series of animated vignettes by various different animators that try to capture the unique brand of Monty Python’s sense of humour.

As a huge Python fan I was really looking forward to this, however was left feeling a little disappointed. Graham Chapman is in my view the most fascinating of the Pythons, this maybe because he is the only one no longer with us, but he was a great comic actor but an extremely troubled man. There is a genuine and admirable attempt here to capture his and the Monty Python sense of humour and overall this was enjoyable and something I would recommend to any Monty Python fans, but only just.

Due to the fact the different scenes are animated by different people there is an inevitable episodic and inconsistent feel to the narrative. Some scenes are quite funny and others just are not and perhaps try too hard. The creative input of the actual remaining Pythons was minimal and it shows and there is a slight feeling of shameless cash in that does not do this fascinating and very talented man the justice he deserves. The animation styles of course vary and once again some work better than others, but are not up to the standard of Terry Gilliam’s. I did not get to see this in 3D and I can imagine the visuals did look very good as they are quite striking at times in 2D, but are just not enough.

The funniest and most compelling scenes tend to be the real footage of the man himself and perhaps beg the question that an actual documentary would have been more fitting. The fact they are limited by only what Chapman recorded was always going to limit them in certain ways. If the actual Pythons were the creative force behind this then maybe it could have been much better and do Chapman justice, unfortunately there is something severely lacking and the inconsistent tone of the narrative really does not help.

Very watchable but instantly forgettable, A Liar’s Autobiography is very entertaining and at times funny but lacks any consistency. It is a valiant attempt to capture the spirit and humour of Chapman and Monty Python, but barely touches the surface of a very private and fascinating man.