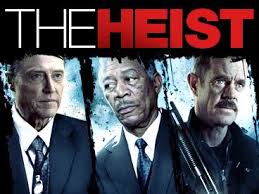 Or The Maiden Heist as it was originally called when made in 2009. However it was only released here in the UK as a straight to DVD film a few weeks ago, which is not a good sign! However, with a pretty decent cast I thought I would give this a go. Well, Roger (Walken) and Charles (Freeman) are security guards at a Boston art gallery that both have individual pieces of art that they like to stare at for hours. Upon discovering that the museum’s collection has been sold to a gallery in Denmark they hatch a plan to steal their beloved art works. They enlist the help of George (Macy) an ex military night guard who likes to get naked to his favourite piece of art (!) which is a statue of a warrior. Using George’s military skills, the three of them attempt to steal the three pieces and swop them with fakes when the move is taking place. Sounds epic doesn’t it?

I watched this film with low expectations, especially after reading some extremely negative reviews that may have confirmed why it took years to get an extremely low key release. There were some reviews that said it was watchable and good fun, and I would personally agree with them. This is a film made with such genuinely honest intentions making it impossible in my view to hate. It is by no means a masterpiece and though intentionally a comedy there are more mild titters than actual laughs. In fact the biggest laughs come when William H. Macy gets naked, and I did not think I would ever say that statement in my lifetime!

The plot itself is hardly original and everything flows along nicely, but very predictably. Most of the comedy is extremely predictable but almost in a reassuring way. This film will not change your life and is quite forgettable but you could do so much worse. It is obvious the three big stars are enjoying themselves and having a bit of fun while Breckin Meyer appears to be wondering what happened to his career when he makes his two minute appearance. It is the natural chemistry and obvious enjoyment of the three leads that help the 90 minutes to flow along nicely.

My major criticism is the apparent lack of effort by those behind the film. All involved from actors to director know they are not making a ground breaking masterpiece, and there is a feeling they are all could have tried a little harder in terms of the comedy. There is a feeling that those making it have almost resigned themselves to making a straight to DVD film which is shame as there was potential for some feel good comedy utilising the cast if the effort was made. However everything is all so good natured that I found it impossible to not slightly enjoy myself while watching it though admittedly one viewing is enough. This is most definitely a film that is a safe bet if the entire family is over and wants to watch a film as it will not offend anyone and if a conversation breaks out for five minutes no one will all of a sudden struggle to figure out what is going on. I would not recommend anyone to put this on their ‘must watch’ list but if you are looking for something that is 90 minutes long and a very easy inoffensive gentle watch then you can do far worse than this little yarn.