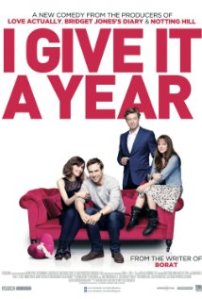 When Josh (Spall) and Nat (Byrne) meet it seems to be love at first sight. However they would appear to not exactly appear to be the perfect match; she is a high flyer and he is an unsuccessful writer. At first it appears that opposites attract but the individual quirks that they both found charming soon turn annoying and those around them, yes you guessed it, Give it a Year. The two of them, aware of the struggles they may both face, also decide to Give it a Year. What follows is the many mishaps and farcical challenges that they face over the following year, not helped by Nat meeting a handsome American client (Simon Baker) and Josh’s ex (Anna Faris) returning to his life.

I myself am not a fan of this genre, but I heard some good things and decided to give it a go. I personally found that I Give it a Year was on the whole a very enjoyable film, which did a few different things with the genre and did have some genuinely funny moments. However there were also many misfiring jokes, scenes that did not work and a lack of realised potential.

This is Dan Mazer’s (one of the writers of Borat) debut so maybe there was an understandable element of restraint for many possible reasons but that for me was the main reason why IGIAY is only a good watchable film, but no more. In my view there did feel to be too many missed opportunities here that a better script may have taken advantage of. There are scenes where so much more subtext could have been added making a more subtle but definitely more humorous scene. Another problem I personally had was the writing of the characters; some were underwritten, some were overwritten but most of them were very hard to actually like. Rafe Spall’s character is a walking cliché personifying the ‘loveable twit’, but there appears to be a lot more emphasis on the latter of those two words and very little work on the former. He is just plain irritating and I found myself wanting him to leave the screen and do it alone. He is of course essentially the protagonist and if the protagonist is hard to like then therefore so is the film. The acting is fine, but our four main characters are actually a little flat and forgettable, often with the supporting cast stealing the scene. Thankfully this supporting cast do provide genuine laughs. Stephen Merchant is of course playing the same faux pas prone character as he always does (but he does do it so well) and some of his scenes are genuinely funny, thankfully his character is not overused, but still some of his scenes just try our patience a little too much. Olivier Coleman’s marriage councillor is a bonkers scene stealer, but for me it was Jason Flemyng and Minnie Driver’s embittered married couple that provide the most laughs with every scene and piece of dialogue they say really bringing the best out of Mazer’s script.

Naturally as the narrative reaches its conclusion this is extremely predictable and clichéd. However due to the nature of the genre I am not even going to use that as grounds for criticism. To be fair to Mazer he does attempt to manipulate this very tired formula with a slightly different closing scene that for me was one of the more successful scenes in the film that involved solely the four protagonists.  Indeed throughout the narrative there are some refreshing takes on the genre and it is nice to see that Mazer is not scared to make a 15 certificate film and put in some more racy jokes which in many cases provide the funniest moments of the film.

A mixed bag that demonstrates potential for better predominantly with just a few more hits than misses, but overall I Give it a Year is an entertaining, very watchable and often funny film that (occasionally) tries something a little different with a very tired genre.