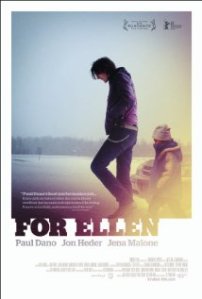 A musician called Joby (Dano) who is a member of a second rate rock band drives overnight in the snow to sign the final divorce papers with his ex wife (Levieva). However, upon discovering that part of the criteria for the divorce settlement is that his wife will get total custody of their daughter Ellen (Shaylena Mandigo), Joby has second thoughts. Having never spent any time with Ellen, he refuses to sign the divorce papers and is determined to get to know his young daughter.

Despite only having a running time of 90 minutes For Ellen travels along at such a slow pace that watching it can be quite an effort. This is especially the case in the first half of a film that is a very much divided into two parts. For the first half of the narrative we get to know Joby often through the use of close ups and minimal dialogue. This can be a very effective technique but there is something seriously lacking here. Dano gives a committed turn but his character is hard to like, especially in the treatment of his good natured but naive lawyer Fred (Heder). Fred still lives with his mother and appears to have lived quite a sheltered life and seems to almost look up to Joby due to the fact he is a rock star. This may be an attempt at character development, as Joby is quite a complex and emotional character. However the entire process and the very gentle pace produce a quite laborious experience and actually achieves very little. Joby has the entire character arc and decides to see his daughter for the first time. The encounter between these two is what makes up predominantly most of the second half of the film.

The naturalistic dialogue in the meeting between Joby and Ellen and the few hours they spend together is raw and honest, and these scenes are genuinely powerful. The awkward silences, the stuttering, the very simple questions from Joby and the one word answers from Ellen produce a realistic, poignant and emotionally effective encounter. It is just a shame that it requires such a lot of effort and perseverance from the viewer to finally see this part of the film. The genuine power of this part of the film almost shows up the previous half, making it seem ponderous and empty in comparison. There is an effective message in there somewhere about how due to his actions in the first half we made the mistake of judging Joby not expecting him to be a good dad, but if this was the intention of the director then it could have been depicted more effectively. There is indeed subtle, but there is also just boring.

The plot developments after their meeting also feel a little contrived in that the director didn’t know how to end to end the film so just lets the viewer think of their own ending by leaving it completely open. There is nothing wrong with an open ending, especially in films such as For Ellen that are very much set in real life as these can add poignancy and emotional power. However in this case it just did not work.

For Ellen is well acted and made with genuine, honest integrity but let down by its lack of ambition and misguided structure. The raw emotional power of (most of) the second half let down by a hollow and alienating first as well as a slightly lazy ending, producing a just about watchable but highly forgettable experience.

An extremely passionate and (semi) opened minded film reviewer, with a hint of snobbish.
View all posts by MoodyB →
This entry was posted in All Film Reviews and tagged drama, entertainment, film, film review, movie review, paul dano. Bookmark the permalink.