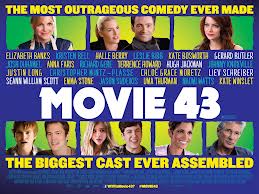 Starring: Quite a few people

The actual ‘story’ to this film varies depending on what country you watch it in. Apparently in the states it centres on a film producer played by Dennis Quaid pitching film ideas. Over here in Britain we follow three incredibly annoying teenagers as after the two older ones play a prank on the younger one claiming there is a movie on the internet called Movie 43 which is the most dangerous and banned film of all time. As they trawl the glorious World Wide Web they come across different short films. These are basically a series of ‘comedy’ sketches involving famous actors embarrassing themselves and the jokes involving various parts of the human anatomy, poo, Gerard Butler as a leprechaun and Hugh Jackman with testicles hanging from his chin. Sounds hilarious doesn’t it?!?

So why did I even watch a film that is famously regarded as being beyond awful you may you ask? Well that would be a fair question. Though I cannot provide a complete answer it must be due to some sado masochistic, sadistic compulsion combined with an intrigue to see just how bad it is and what the hell all these big names are doing in it! I enjoy a bad movie, anyone who knows me is well aware that in fact I often embrace them. I love the films by The Asylum and bad films can be so bad they are funny. I also do not have a problem with Farrelly brothers’ style puerile and crude humour, but this is intended to be funny and simply is not. This is quite possibly one of the worst films I have ever seen, watching it was a horrible experience and I would implore anyone reading this to never, ever watch it!

There is nothing funny or redeeming about this film. The sketches are never funny and the scenes of the ‘story’ are an horrific experience to watch. I do not care for any of the apparent shock value of all these big names being in it, as after all they are only actors. I know for a fact they earn a lot more money than I do so good luck to them. There may be here some satirical portrayal of modern culture or proving that actors care more about money than integrity here, I say maybe. Apparently all these names got very little money and that is irrelevant as this film just simply is not funny, you cannot laugh AT or WITH. It is just sheer torture to watch. Peter Farrelly was apparently the genius behind this and though I like some of his earlier films he should be put in prison for crimes against humanity.

Like I said, I am not too bothered about all these big names being in it as they just actors who earn a lot money anyway. Yes they should have more integrity but their scenes must have taken a few days to film, they will have already forgotten about this film existing. It means nothing to them. What is genuinely disturbing is the fact that someone has pitched this idea and others have somehow thought this film is a good idea and agreed to pay for it to be made. According to IMDB the budget was around $6 million, a lot can be done with that money. I will probably never get to see what that much money looks like, and if it looks like Movie 43 then I never want to.

Movie 43 is not funny in the slightest, but simply painful to watch and definitely one of the worst films I have ever seen. I implore people to never subject themselves to this pain and misery.

An extremely passionate and (semi) opened minded film reviewer, with a hint of snobbish.
View all posts by MoodyB →
This entry was posted in All Film Reviews, Rants and tagged crap, film, film review, hollywood, hugh jackman, movie review. Bookmark the permalink.