THE BURFORD TOP 10: MY MOST QUOTABLE FILMS OF ALL TIME

We all of course have films that we love, and we have films that we love and often quote. These quotes may always make us laugh, they may be poignant or they may just have a unique individual meaning to us. Dialogue is very hard to get right; and sometimes a film has such incredible, unique and memorable dialogue that it is so much more engaging and after watching it you eternally find yourself quoting it.

Of course we all have specific lines from films we remember for our very own unique reasons, for this list I have gone more for the ten films that for me continuously have quotable and memorable lines throughout the narrative. Admittedly this has lead to this list being predominantly funny quotes, but the ten with the dialogue that most stayed in my mind. Trust me; this is both good and bad.

This being my personal top ten it is the top ten films I have found myself quoting the most over time. However this does not necessarily mean it is the ten genuinely best scripts of all time. Sometimes I found myself and friends continuously quoting from a film because its dialogue is so incredibly and uniquely bad. Read on and this will make sense.

Of course this is my opinions and solely based on the films I alone have seen, and therefore the ten that I personally have found myself quoting all the time. If anyone has their own suggestions that they feel I should have included then please comment and if I have not seen them I will give them a watch.

An obvious choice maybe, but a thoroughly justified one in my view as this is the one film with the most memorable dialogue I have personally ever seen. For me the sign of a great film is that it gets better with every viewing and Withnail & I is the perfect example of this. I remember in my student house watching this repeatedly, my housemates and myself quoting it at each other, and yes there did tend to be alcohol involved. The fantastic performances from Richard E. Grant, Paul McGann and Richard Griffiths also help truly bring the dialogue to life.  Though it is predominantly hilarious, there are a plenty of effective moments of melancholy and poignancy. It is a uniquely British humour that perhaps works better in context than isolation, but there is something in both these characters that we can all relate to.

There are so many quotes, and we all have our favourites, and though many of the greater quotes are within a full conversation, here are a few of the briefer ones:

“Don’t you threaten me with a dead fish!”

“I’ve some extremely distressing news… we just ran out of wine!”

“I’ve got a bastard behind the eyes.”

“Even a stopped clock tells the right time twice a day.”

“As a youth I used to weep in Butcher’s shops!”

Trust me, I could go on. 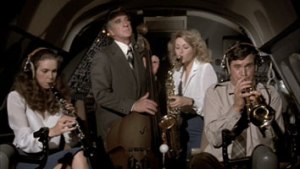 In all Abrahams, Zucker & Zucker spoof style comedies the gags and one liners make up the comedy, and in Airplane they do not stop coming. Infinitely silly and infinitely funny, Airplane combines memorable characters and some truly memorable lines. The list is endless; here are a few of the shorter ones:

“Surely you can’t be serious?”, “I am serious, and don’t call me Shirley”

“A hospital! What is it?”, “It’s a big building with patients in it. But that’s not important right now.”

“Have you ever seen a grown man naked?”

Another one for me that improved with repeat viewings, I know many find Will Ferrell a little annoying and samey, but here he his perfectly suited to the character of Ron and all the outrageously arrogant and daft lines of dialogue he has. Paul Rudd and Steve Carell get their fair share of lines too.

“I am in a glass case of emotion.”

“I’m very important. I have many leather-bound books and my apartment smells of rich mahogany.”

One crime this and Lock, Stock and Two Smoking Barrels is guilty of is that it has paved the way for a plethora of unfunny ‘mockney’ films that are supposed to be funny but just plain stupid and rather boring. However for me Snatch works; it is very silly of course, but with a good cast obviously having a blast (especially Alan Ford) this is an extremely entertaining film that is tremendous and infinitely quotable. The comedy here often relies on exchanged quick witted one liners in conversation, but here a few in isolation:

“Shut up and sit down you big bald fuck!”

“In the quiet words of the Virgin Mary; come again?”

“Where did you lose him? He’s not exactly a set of car keys is he?”

“What’s happening with those sausages George?”, “Five minutes Turkish.”, “It was two minutes five minutes ago.”

“Who is gonna mug two black fellas, holding pistols, sat in a car that is worth less than your shirt?” 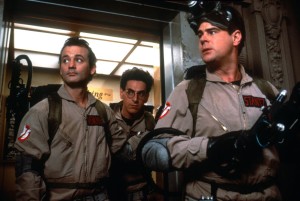 As a child of the 80s this was one of my favourite films as a kid and though it perhaps looks a little dated, it is still tremendous fun with a cracking script.

“Ray. If someone asks you if you are a god, you say yes!”

“Why worry? Each one of us is carrying an unlicensed nuclear accelerator on his back.”

“Sorry, Venkman, I’m terrified beyond the capacity for rational thought.”

No list of great quotes would be complete without Arnie, and thanks to Shane Black’s silly but quick witted script Predator is not only outrageously entertaining but also has some truly classic lines.

“I aint got time to bleed.”

“This stuff will make you a god damned sexual Tyrannosaurus, just like me!”

“Get to da choppah!”

For me what makes Martin McDonagh’s black comedy (or white tragedy as it has been referred to) is the exceptionally quick witted script. The extremely swear-heavy tone is perfectly judged and Colin Farrell, Brendan Gleeson and Ralph Fiennes are blatantly really enjoying themselves as they exchanged fantastic lines. It is just a shame McDonagh got a bit too smug and complacent when he later made Seven Psychopaths. I also should probably be a slightly responsible blogger and perhaps refrain from mentioning some of the best quotes here.

“One gay beer for my gay friend, one normal beer for me because I am normal.”

“You two are weird. Would you like some cocaine?”

“It’s only Christ’s blood, so of course you don’t f**king have to!”

Predator had a great script, but for sheer cheesy Arnie one liners The Running Man has to be his masterpiece!

“Just give them an evasive answer. Tell them to go f**k themselves!”

“…Because there’s nothing funny about a dickless moron with a battery up his ass.”

“They think I’m your girlfriend.”, “I can straighten that out. See that camera up there? I’ll strangle you in front of the whole audience.”

Remember I mentioned films sometimes being quotable for the wrong reason? Well here you go! I think it is a commonly accepted fact of life that this is one utterly terrible film for reasons we all know. However, the script is so cringe-inducing bad that it cannot help but be extremely memorable. Every line from Arnie is a clunky and downright embarrassing one liner or pun involving feeling cold while every line from Uma Thurman is an embarrassing euphemism. Even Clooney gets in on the act. They may be awful, but they are infectious and certainly unforgettable. What makes the whole thing funny is that it is all delivered with total straight faced stoicism!

“I hate to disappoint you but my rubber lips are immune to your charms.”

“You’re not sending me to da cooler!”

“This is why Superman works alone.”

“Mercy? I’m afraid my condition has left me cold to your pleas of mercy.”“I need a sign that you’ve turned over a new leaf.”, “How about “slippery when wet?”

“In this universe, there’s only one absolute… everything freezes!”

“If revenge is a dish best served cold, then put on your Sunday finest. It’s time to feast!”

There are so many more, but I just cannot bring myself to go on.

Anyone who knows me unfortunately knows perfectly well how often I quote this film. Once again, this is down to an extremely bad script. When I say bad, trust me in that there is no word to describe the script. It is so clunky, clichéd and outrageously deluded in that those who wrote it thought they were writing an intelligent crime drama that the result is one of the funniest and infinitely quotable films of recent years. It is so incredibly racist, sexist and downright deluded in delivery, and the conversations between characters include some of the worst but equally most memorable dialogue I have ever heard. If this was an intentional comedy it would not work, but because it is delivered with such stoic seriousness it is beyond hilarious.

“You can’t beat a bit of wet.” (When our protagonist refers to women)

“The price is right? This aint the game show you c**t!”

“He should be in Marbella! He’s bang out of order!”

“Two words for you; Angry Russians!”

That is just the tip of the ice berg, however the most poignant moment of dialogue for me:

“Sometimes bollocks means ‘its bollocks’, sometimes ‘the bollocks’, or sometimes it just means (Tugs on the crutch of his trousers) ‘bollocks’!”