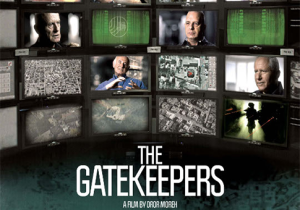 The Gatekeepers is a documentary featuring brutally honest and frank interviews with the six surviving former heads of Shin Bet, the Israeli security agency revealing inside information which up to now has been a well kept state secret. Using a combination of archive footage and visual reconstructions, the six men talk openly about many important moments in the Israeli-Palestinian conflict from the Six Day War to the present day. They provide a unique inside point of view on such events as assassinations, foiled terrorist plots from both sides, intelligence failures and their particular methods of ‘interrogation’.

In my view, documentaries can provide a much more reliable and compelling investigation into the human mind, as well as historical figures. In a similar way to the unforgettable The Act of Killing, this is all real, and delivered with chilling and brutal honesty that a dramatisation may unfortunately dilute. Though of course it is impossible to know exactly how truthful these men are throughout the narrative, their unique perspectives and experience of so many moments that the human race should be ashamed of provides compelling and sobering viewing.

As a Westerner, I tend to only know of this conflict from what is reported in the media or what is written on the internet. The Gatekeepers not only provides a fascinating and often disturbing insight into the dark history of this ongoing conflict, but a firsthand examination of the mindset of men caught in the middle and offers some explanation into why they did what they did. This is something that privileged Westerners like I could only begin to imagine.

The visuals are effective, but it is the words of these men that haunt the mind for a long time. All six men have different personalities, and it is quite clear that they approached their roles as head of Shin Bet in different ways. They all have a differing sense of morality and patriotic duty, but as they all tell of their experiences and explain the reasons for their actions, but they also have a condemned sense of realisation when saying “We win every battle but lose the war”. It is all delivered in a way that makes it so much clearer to understand than any dramatisation could ever achieve.

Some may criticise this film for only presenting one side, but that would be unfair in my view. This is not a film that attempts or wants to take sides, it simply provides an unrivalled insight into one of the most brutal ongoing conflicts in the world and it certainly enhanced both my knowledge and understanding. This may be a film that different people will take different things away from, but for me this film is one of essential viewing and unique undeniable power.

In a year of excellent documentaries of war and conflict; The Gatekeepers is another one that is both chilling and disturbing, but also essential and unforgettable viewing.

An extremely passionate and (semi) opened minded film reviewer, with a hint of snobbish.
View all posts by MoodyB →
Gallery | This entry was posted in All Film Reviews, Documentaries, The Best of 2013, World Cinema and tagged documentary, entertainment, film, film review, foreign films, movie review, world cinema. Bookmark the permalink.