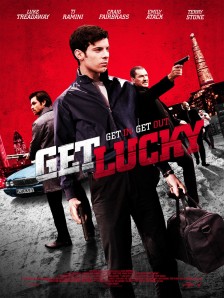 When Lucky (Treadaway) returns to London, due to his driving skills he is immediately and unwittingly involved in a heist with his best friend to steal a large sum of money off the heavies (Fairbrass and Terry Stone) who work for a local and very powerful gangster called Mr. Zigic (James Cosmo). After the heavies kill Lucky’s friends the money goes missing, they hunt down Lucky and he is told he has to pay them the money or, basically be killed. Conveniently, Lucky’s brother Rapheal (T. J. Ramini) is planning a heist of a local illegal casino and so to raise the money Lucky takes part as their getaway driver and take a cut. Also involved in the heist are Niko (Marek Oravec) and Eli (Jason Maza) who actually work for Mr. Zigic but know nothing of Lucky owing the money. Lucky also gets involved with Bridget (Atack) who unbeknown to him is actually in an abusive marriage with Nico and she is unaware that he is working Nico. I am going to have to stop now as I am starting to feel dizzy!

Sounds a bit complicated doesn’t it? Well, though never difficult to follow the Guy Ritchie style intertwining narrative, it shows perfectly what Bennett’s cockney opus aspires to be. With a reported budget of over £3million he had a decent bit of cash to play with, but despite showing admirable ambition and being better than many recent similar films (there are a lot) it just falls that little bit short. It is quite good fun and very watchable, but just struggles to figure out what it wants to be. Black comedy? Edgy drama? There are hints of both but neither are convincing.

Get Lucky appears to attempt to blend comedy, drama and extreme violence, which can work (I really enjoyed Lock Stock and Snatch), but is extremely hard to get right. Unfortunately for me Get Lucky just doesn’t quite work and gets bogged down in all the usual clichés of the genre and lacks the great script or acting that it so badly needs.

Though always tongue in cheek in tone and never taking itself particularly seriously (thank God), Get Lucky just lacks strong characters. They are of course criminals and so have questionable morals, but they are all just cardboard cut out caricatures and never memorable. The acting is also pretty wooden and obvious, but with a very flat and clunky script great acting may not have made a difference anyway. For a film like this to work it has to have an edgy, memorable and quotable script, but is just very weak and perhaps a little complacent. It is a film that so desperately wants to be funny, but any laughs tend to be more at than with. This is a waste as the interlinking story is, though a tad farcical, good fun.

Though a superior addition to the ridiculously high quantity of London gangster comedy/dramas of recent years, Get Lucky is just about watchable and at times fun, but lacks the script or characters to elevate it from forgettable clichéd mediocrity.