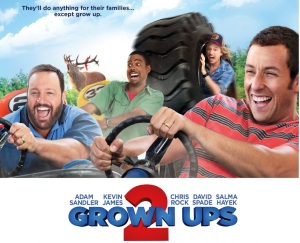 Realising he cannot live being away from his friends, Lenny Feder (Sandler) and his family have decided to move back to his hometown. There Lenny and his equally immature and bonkers friends often act as silly as they can, much to the annoyance of their long suffering wives (and the even longer suffering audience). However, their seemingly happy existence is threatened when the lake they go to every year is taken over by a group of swearing, drinking college fratboys led by Taylor Lautner wondering what happened to his career.

Well that is the ‘plot’, but that gets less than twenty minutes coverage while the rest of this horrendously excruciating 100 minutes is essentially a series of painfully unfunny sketches. The fact is of course that if you liked Grown Ups then you will like this. I will confess from the offset that I have never been a huge fan of Adam Sandler, but I thought some of his earlier films are ok, but he has most certainly gone downhill in recent times. I therefore had certain expectations of what Grown Ups 2 would be like, but I wanted to give it a chance and so rented it. Naturally, my expectations were horrifically met, and then some!

In the opening scene we find Adam Sandler waking up to find a deer in his house that when it gets startled, starts urinating on everyone and everything. This basically sets the tone. This film is basically Adam Sandler and his mates being able to prat around for 100 minutes being as crude and stupid as they can, but at least Kevin James explains the ancient art of the burp-fart! I do not have a problem with puerile humour, in fact I quite enjoy it sometimes, and of course I like silly humour as not all films should be deadly serious. For example, this year’s This is the End had a plethora of puerile jokes and contained an element of smugness, but yet was done with an element of energy and passion by its cast, and was also (and this is the key part) genuinely funny. However Grown Ups 2 is just horrible with no care for plot, storytelling, the craft of film making or indeed anyone who has paid money to see this. This is essentially Adam Sandler and the rest of his rich pals laughing at the expense of those who have paid £10 (which is a lot of money to see a film for so many of us). This is not actually very different to someone insulting you for 100 minutes, as that is what Sandler and co are essentially doing.

This being an Adam Sandler film there is of course plenty of cheesier clichéd moments that are sicklier than candy floss covered in honey, such as appreciating their wives and helping their children experience the pains of growing up in an attempt for there to be character arcs and some ‘emotional’ core. Due to the painfully episodic nature of Grown Ups 2 these moments feel so forced and downright embarrassing, that they are just even more horrible to watch than the ‘funny’ moments.

At one point Sandler is questioned about how he manages to have a wife as attractive as Salma Hayek and he says that is like a Hollywood a movie. Maybe this is Sandler willing to mock himself? More like that the man is a completely deluded idiot with a humungous ego. Grown Ups 2 is a diabolical film made with absolutely no passion, craft or care for anything. All involved know they do not have to make any effort whatsoever and they essentially laugh at everyone who invests their time and money into this deep insult to cinema.

No matter how much spleen I vent, the painfully undeniable fact is that Grown Ups 2, like all Sandler films made a substantial profit at the box office. The depressing fact is that as long as this happens, then this man will continue to churn out horrific films. As producer on all his films, he is pretty much in charge and plays God. In fact, by the way he acts I would not be surprised if he genuinely thinks he is. He must be stopped!

Puerile, immature and quite simply not funny, Grown Ups 2 seems further proof that Adam Sandler is a complacent smug egocentric who hates cinema and shows no care to those that pay to see his films. I warn everyone that has not seen Grown Ups 2 to avoid it like the plague and every film Sandler ever makes again, as this man makes his films with no passion or care and until they stop turning profits they are only going to get worse!