Now, let me define my terms: The films in this list are far from masterpieces, with plenty of plot holes and flaws aplenty. However, if you are happy to forgive these things and want a film where you can sit back, switch your brain off and watch something that is just fun and enjoyable then this is my personal top ten of the year of those exact films*. These films are unlikely to leave a lasting impression and indeed not ones I would ever suggest that anyone rushes to see. However they are perfect as a onetime view as they are often outrageous, cheesy, very watchable and just pure popcorn pleasure, and often made with tongue very firmly in cheek. What is guaranteed is laughs*, though of course these may be predominantly AT as opposed to WITH. One omission from this list is White House Down, I have heard it is outrageous missile shooting fun, but I never got to see it!

*a generous supply of alcohol nearby also enhances the experience.

The franchise has most definitely come a long way since its 2001 debut; what started off as quite a serious film has evolved into increasingly silly blockbusters, maybe the introduction of Dwayne Johnson being the turning point? With the action moving to London and then Spain (another country as Vin Diesel thankfully reminds us in the film); the sixth instalment was by far the most outrageous yet with an embarrassingly funny script, a ludicrous plot and even more audacious stunts. Of course, not to mention by far the world’s longest runway and a generous helping of the casual racism involved in the usual representation of English characters in American blockbusters! There were so many things wrong with this film, but it just made it so much more fun. A mid credit sequence also revealed an excellent addition to the cast for number seven, an actor who would certainly give Dwayne Johnson a run for his money with the cheesy one liners. Of course the tragic death of Paul Walker has understandably put number seven on hold for now, but hopefully it will happen and will do his memory, and indeed us all, proud.

While so many superhero films try to go all serious and soul searching, the title was the only thing dark about the God of lightning’s second solo outing. Thankfully all involved did not forget just how silly the initial concept is and only took advantage of that creating an outrageously entertaining romp. Yes it very often makes no sense without even trying to, but the action comes thick and fast, the gags are nonstop, the outrageous finale is audacious as it is somehow ingenious, and of course it is impossible not to enjoy Tom Hiddlestone’s magnetic performance as Loki.

Finally, once bitter enemies Sly Stallone and Arnie team up as the two leads in this textbook, nuts and bolts action romp very much in the vein of 80s action thrillers. It has everything we would expect and demand from a film with these two; cheesy one liners, a ludicrous plot that often defies logic with holes as wide as the Atlantic Ocean and plenty of witty banter. It is all delivered perfectly by the two of them who are obviously thoroughly enjoying themselves, and how the hell can we not too?!?

4. This is the End (Evan Goldberg and Seth Rogen)

Yes there may be the occasional whiff of smugness to James Franco and his pal’s apocalyptic comedy, but it was Citizen Kane compared to a certain comedy on a similar subject that was released this year. Literally playing themselves, they all were happy to mock themselves and their own careers as well as having a tremendous time being essentially horrible to each other and filming it. Of course if you do not like these actors then you will hate This is the End, but for the rest of us, the energy and plethora of disgusting humour that they all brought to the screen was a joy to watch, especially for Backstreet Boys fans.

As textbook a buddy movie as they come, but with Denzel Washington and Mark Wahlberg on tremendous form and right royally enjoying themselves; 2 Guns was a film that did exactly what it said on the tin (well, poster or case). Naturally it had an audacious plot with so many twists that actually got more outrageous than Denzel’s shirts, but it was all so much fun! In a time of ‘extended cuts’ it was also refreshing to see a film stay at a perfectly lean 108 minutes and not outstay its welcome.

Yes it is quite a long film, but plot-wise Pacific Rim was so outrageously clichéd and cheesy it could not be anything else than funny. To take this film seriously would be to probably lose your faith in humanity; the script is clunky, characters clichéd as hell, Ron Pearlman is more Ron Pearlman than ever and it is impossible not to see each plot development way before it happens (perhaps arguably from a director who should know better). However take Pacific Rim with a giant robot sized pinch of salt, and Pacific Rim is outrageous and often reassuring fun. As well as knowingly being a bit crap in the script department, thankfully there was a lot of time and effort placed on the special effects. This is a film that did look expensive and very, very big, as well as for me being perhaps the funniest unintentional comedy of the year.

It almost felt like fate that Arnold Schwarzenegger and Sylvester Stallone released solo projects almost at the same time, and while Sly’s Bullet to the Head was a very serious and very rubbish effort, The Last Stand was tremendous fun. It is a film that never takes itself seriously (thank God) and contains everything we all want from an Arnie film; A ridiculous and often generic plot, good action, cheesy one liners, the ‘comedy’ sidekick and Arnie doing what he does best (he just does it a little slower these days). 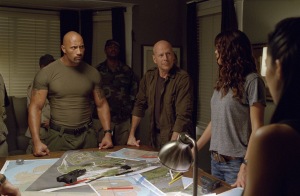 When at the start of Retaliation we get a Top Trumps-esque reminder of what happened in The Rise of Cobra and then Dwayne Johnson unleashes some gloves that can melt a solid metal chain fence, it is pretty obvious what we are all in for. Retaliation is the dumbest of dumb action films, but it seems very aware of this and becomes increasingly ridiculous. The lulls in pace for embarrassing attempts at character development that are as bad as Ray Stevenson’s Texan (well, I think it was that) accent are unnecessary, but apart from that this was truly outrageous fun. Logic did certainly not play a part (a character that died rather badly in number one turns up absolutely fine here) and it does feel like they made the plot up as they went along, but that is all part of the fun. Yes Bruce Willis turns up looking rather bored as usual, but thankfully he is not around very often.

As the profound tagline to this masterpiece says, “enough said!”

While Snow White & The Huntsman went all moody, Red Riding Hood went all Twilight-y and Hansel & Gretel went all gory and rubbishy, Jack The Giant Slayer was strangely like a breath of fresh air. It is essentially a $200 million panto on screen, but is all the more fun for it with the likes of Stanley Tucci, Ewan McGregor and Ian McShane sporting silly hair and hamming it up like their lives depended on it. It is light and colourful and tweaks the famous tale to incorporate dramatic and loud battle scenes to keep things going along nicely with its impressive CGI. Yes it is extremely forgettable and daft, but an absolutely unashamedly camp, glorious and colourful romp!