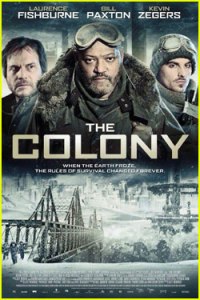 After global warming caused a new Ice Age that continues relentlessly, the surviving members of the human race are forced to live in huge underground bunkers which are referred to as ‘Colonies’. Colony 7 gets power from the wind, manages to grow its own food and they have a huge supply of seeds that should that day when they can plant them ever come. Under the leadership of Briggs (Fishburne) it is a fair place to live, however after a flu epidemic wiped out a huge number of the colony’s population the main rule is that if anyone becomes ill they are quarantined. Another rule that they answer a distress call of other Colonies and after receiving a distress call from Colony 5, Briggs organises a search party to travel across the deserted snowy landscape to investigate. There awaiting them is an unimaginable horror that poses a far greater threat to their entire existence than just the treacherous cold.

It is that age old tried and tested plot structure:

Laurence Fishburne: “A distress signal! We must risk our own lives and embark on a treacherous and potentially very dangerous journey to investigate!”

Pretty much everyone else in the film: “But Larry isn’t that not only really dangerous but also more stupid than it is brave with bad stuff extremely likely to happen?”

Laurence Fishburne: “Of course it is, but this film is pretty screwed for a story if we do not go! I am also going to leave behind Bill Paxton who despite being established in the film’s opening scene as a real nasty piece of work who wants to take over, will definitely not try to take over control of the colony while I am away!”

Everyone else in the film (except Bill Paxton): “Shit!”

The entire narrative to The Colony ticks those boxes off as it goes along, but in all fairness does not feel ashamed to do so. There is nothing you have not seen before in terms of the narrative, and it is pure genre film making. However, if entered with the right expectations, I would say this is a perfectly adequate B movie that is never less than vacuously entertaining for its 95 minute running time. There is not too much preaching about humanity and morals; this is a film that is happy to embrace its clichés and all the trademarks of its chosen genre. There is the subject of when people are definitely ill, to avoid infecting the rest of the colony they are given the choice to be shot or try their chances in the outside. Thankfully, this is more to show that Bill Paxton’s character is a little unpleasant and any moral questioning of humanity and what it all means is pretty much ignored (probably for the best in this case).

The surprisingly large budget of an estimated $16million (imdb) is used well to create a bleak and unexpectedly effective atmosphere. An Ice Age is very much a possible phenomenon that can happen to our planet at any time, and the pallet of the surprisingly well done cinematography only enhances the atmosphere.

Once the ‘unimaginable horror’ is revealed (I think we can all guess roughly what it is likely to be) the 18 certificate is used to good effect with some gory violence (but never too gory to the point of comical) and though no one is going to be on the edge of their seat, things are never boring. Of course when they return to Colony 7, Bill Paxton has taken over and his text book nasty piece of work is more a plot device than anything else. I have never liked him as an actor, and he is as terrible as ever here, overacting as usual. Meanwhile Larry is obviously cast as the leader due to his Morpheus voice and fights surprisingly well for a man that is, shall we say, not as lean as he used to be. The main protagonist is in fact Kevin Zeger’s Sam, though of course the two ‘bigger’ names appear first for obvious reasons, and he is perfectly adequate and likeable.

The final third is gory and brutal, again though most outcomes are never in doubt, and there are flaws a-plenty, The Colony is never anything less than forgettable entertainment. If you are bored and want to kill 90 odd minutes with something with a bit of action and gore that is very easy to watch, then I can happily say that The Colony serves that purpose with aplomb.

Though this a pure B movie and genre film of the highest order, if this had a bigger budget, an A list cast and was directed by Roland Emmerich, apart from more elaborate and expensive looking set pieces, would it really be any different?