STRANGER BY THE LAKE (Alain Guiraudie, 2013) 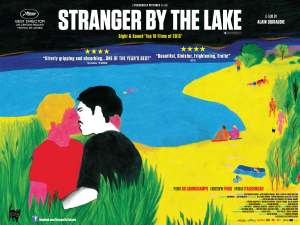 The edge of this secluded lake in France at the height of the summer is a very popular spot for ‘cruising’ amongst homosexual men, with the woodland next to the lake the place for sexual encounters to take place. The youthful Franck (Deladonchamps) is immediately entranced by the handsome and slightly older Michel (Paou). After witnessing Michel drown his lover, this only seems to increase Franck’s desire and attraction for Michel, despite knowing just how genuinely dangerous he actually is.

Stranger by the Lake is without a doubt a film made on its own terms; it has minimal plot and though only being 100 minutes, certainly likes to takes its time. At the centre of the plot is the character of Franck, played with suitably youthful naivety and enthusiasm by Pierre Deladonchamps, he is in pretty much every scene and it is the slow burn of the pace that allows us to really get to like the film’s protagonist. This means that when he starts to fall for the seductive Michel, we genuinely fear for him, despite the fact that we and Franck himself know how potentially dangerous Michel is. It is the subtle character development of the characters in Stranger by the Lake that ultimately makes it a very involving film.

The film’s first two thirds are staged at an unashamedly slow pace, a pace that reflects the pace of life in the film’s setting. With plenty of patient long takes and minimal dialogue to allow the gentle sounds of birds singing, the rustling of tress and the gentle wash of waves against the edge of the lake to often fill the screen; Stranger by the Lake is a film with an intoxicating atmosphere. With the entire narrative taking place at the shore of the lake and its woodland surroundings, it allows for us not just to get to know and like the character of Franck, but also the various characters he meets on a daily basis, including the very likeable Henri (Patrick d’Assumçao), who is happy just to sit by the lake but never intents to cruise.

The viewer’s patience is thoroughly rewarded by a final third filled with genuine tension that is only enhanced by our engagement with the film’s characters. The emergence of a detective (Jérȏme Chappatte) only enhances Stranger by the Lake’s examination of very universal themes, and it is the fact these themes are universal and our emotional investment in some of the film’s characters that it is a final third that is truly gripping. It may not provide answers to all of the questions it poses, but Stranger by the Lake proves to be an increasingly engaging and memorable viewing experience. Though it may sound like a film that takes itself very seriously and is a little self-indulgent (well, it is French after all), Stranger by the Lake also contains plenty of subtle and self-aware humour to make sure it is always grounded in reality.

As subtle as the gentle waves that approach the edge of the lake it is set in, Stranger by the Lake it is a seductively shot and deeply involving character study about surprisingly universal and therefore very engaging themes.