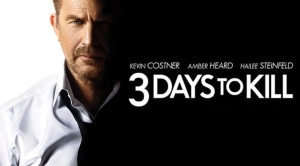 After discovering he has terminal cancer, veteran CIA agent Ethan Renner (Costner) decides to spend his remaining months attempting to reconnect with his daughter (Steinfeld) and wife (Connie Nielson) to make amends for never spending any time with them in the past, with his wife having to leave him to look after his daughter by himself. However, when he is offered a potential cure for his condition by a CIA operative (Heard) in exchange for taking down a group of ruthless terrorists, Renner now faces the most dangerous mission of his career and the responsibility of looking after a teenager on his own, all using his CIA skills and a purple bike!

So it would appear that Costner after being (in my view) the best thing about Man of Steel and doing a solid job in the mentor role in Jack Ryan: Shadow Recruit, wants to do a bit of a Liam Neeson turn in the twilight of his career. So who better to go to than Luc Besson? Well, when making this career decision Costner seemed to forget that Luc Besson (writer and producer this time) has forgotten how to make good films, and director McG has never made a good film (maybe This Means War being just about an exception). Not only did Kev forget that vital fact, but he seems that he forget to read the script to 3 Days to Kill. Though it is highly conceivable that 3 Days to Kill did not really have a script as it does feel they made this film as they went along as it is truly all over the place, and not in a good way.

I do not know if the phrase ‘tonally bipolar’ has been used before or even exists, but it perfectly describes 3 Days to Kill. It is a film with no narrative cohesion whatsoever as it permanently shifts tone and genre from start to finish. The title itself was obviously picked from some machine that generates generic action film titles as it bears no relevance to the plot; the phrase is said once in the script by Hailee Steinfeld, and though it is supposed to be a casual phrase she delivers it in such a way that she should look at the screen and wink while saying it. Maybe the whole thing is a parody, because for what is supposed to be an action thriller there are many constant attempts at humour and certainly no thrills, but they often feel slightly out of place as the main ‘plot’ and its delivery are quite serious. The laughs I had were however predominantly AT and not WITH, often brought by an outrageous flabbergasted feeling of disbelief at what I was seeing on screen.

The action sequences themselves are solid and conventional enough, though a little underwhelming due to their length and the fact they are actually very few and far between because for a vast majority of the narrative we almost have a completely different film about Ethan’s relationship with his daughter, including Ethan seeking parenting advice from people he tortures and constant references to a purple bike. This may have seemed funny on the page, but just is not on the screen, and though the bike plays a pivotal part in the film, it is a severely overused metaphor that never works. Though I must confess that out of all the characters in the film, the bike was probably the one I cared about the most. There is also a subplot involving an immigrant family squatting in Ethan’s apartment, and though it may add to attempts at his apparent character arc (in saying that I am probably giving it more thought than screenwriters Luc Besson and Adi Hasak did) it just contributes to the narrative (loose definition of that word) being a mishmash of so many rotten components.

In the lead role, Costner is admittedly a likeable screen presence and his stoic and straight faced performance brought about for me most of the laughter, he also admittedly does look the part when he is required to show his meat headed action chops. It is a performance that deserves far better in what would otherwise by a really cheap straight to DVD b-movie that just happens to have Luc Besson funding it. Hailee Steinfeld and Connie Nielson do their best with roles that are very much at the disposal of the screenwriters and the bad guys are nasty European caricatures. Then there is Amber Heard; admittedly the dialogue she is given and the fact her character is quite bizarre may not help, but she once again proves that she really cannot act as she delivers every line with horrible deluded smugness. Also, as this is a Luc Besson produced film, it is set in Paris and fills like a tourist advertisement for France’s capital.

The (unintentional) laughs that 3 Days to Kill produce means that it may not be as much of a truly arduous and laborious experience as Taken 2 or The Family, but is further proof that Luc Besson is just happy to throw his vast wealth at films and not really put any effort in to making them be any good. McG’s direction and camerawork are conventional at best, with chase sequences having plenty of continuity errors, further proof of the little effort that was put into 3 Days to Kill. The drugs Ethan takes for his (very convenient) miracle cure often make him trip out, and the audience knows exactly how he feels as the whole film feels like one bizarre, random and inexplicable bad hallucinogenic trip, and not in a good way. I see Besson has Taken 3 and Transporter 4, 5, and 6 (!) in the pipeline, The Fifth Element, Leon and even District 9 really do seem like such a long time ago!

Though Costner may do his best, he cannot stop 3 Days to Kill from being as peculiar as it is underwhelming. It is a truly bizarre cacophony of genres and tones all thrown together and further proof that Luc Besson should just retire.