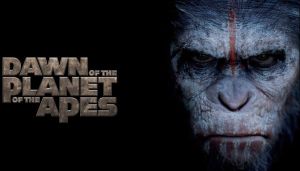 After the so-called ‘Simian flu’ has wiped out virtually the entire human race, Caesar (Serkis) and his community of genetically evolving apes live in peace in woods outside San Francisco. However, when Malcolm (Clarke) and a small group of humans venture near to the ape’s home, the apes learn that some humans were genetically immune to the virus, living in the ruins of San Francisco led by a man named Dreyfus (Oldman). Though Caesar warns the humans not to venture near the ape’s home again, the humans only hope of maintaining a supply of electricity is by reactivating a dam near the ape’s home. Malcolm manages to persuade Caesar to call a truce while he and a few others fix the dam, but escalating tensions and suspicions from both ape and human threaten to end the truce and bring all out war.

After Tim Burton tried to bring back the famous ape franchise with disastrous consequences, I must admit I had very low expectations for Rupert Wyatt’s Rise prequel in 2011. Surprisingly it was actually an intelligent and well written blockbuster that had the perfect mixture of brain and brawn, with an added helping of cautionary allegory to produce one of 2011’s most surprisingly satisfying blockbusters, and it breathed new life into a franchise. So here we have part two in the intended trilogy, with Matt Reeves (Cloverfield, Let Me In – so not a glittering CV then!) now on directing duties with a very hard act to follow and standard to maintain. Though Dawn seamlessly takes over where Rise left off (complete with a short news footage style catch up at the beginning), its narrative in isolation is without a doubt lacking any originality, following a checklist of narrative developments and  clichéd and slightly contrived characters that are there as a narrative device quite diligently. That is not a criticism in isolation, as for me it is what you do with these generic tropes, and Reeve’s film does tell its story very, very well to make for me one of the most involving and satisfying blockbusters of the year.

Though Dawn may not quite have the cautionary and allegorical subtext that Rise did, what it does have is a permanent atmosphere that is genuinely simmering and tense from start to finish. The bleak and desolate (and often rainy) landscapes captured perfectly by Michael Seresin’s brooding cinematography and Michael Giacchino’s score enhance the feeling of isolation and help to make the atmosphere created by the slightly conventional narrative seem more natural.

The main strength of the emotional involvement of Dawn is for me the main individual characters on both sides, though they may fit generic moulds and be there as narrative devices, the performances in particular enhance our emotional investment in both human and ape. Though the human characters do share some slightly clunky exposition dialogue at the start, they are given enough coverage and depth to be cared about. The always watchable Jason Clarke evokes sympathy throughout, with his performance making his character seem more than just the textbook naive/ sympathetic character, while Gary Oldman, Keri Russell and Kodi Smit-McPhee all produce sympathetic turns (though Oldman has surprising very few scenes). Though poor Kirk Avecedo very much IS the character there as a narrative device and the screenplay does not even attempt to hide it.

Of course, as you would expect, the main stars are the apes themselves, with Caesar’s character evolved and more world-weary, his natural conflictions do evoke true sympathy and the stunning motion capture animations visually depict this magnificently. It is the relationship and conflicting beliefs between Caesar and his second in command Koba (Toby Kebbell) who has pure hatred for human’s after the treatment he has received in the past (and he has the scars to prove it) that mainly drives the narrative. The stunning animation and brilliant vocal performances from Serkis and Kebbell once again enhance the involvement of the story, helping it to rise above its slight contrivances. The animation manages to capture a vast array of expressions and inner feelings that cannot be expressed in dialogue, particularly the face of Caesar’s son Blue Eyes (Nick Thurston).

Of course it goes without saying that the film is a stunning technical achievement in terms of the apes, but the film itself is very well shot by Reeves, holding the camera and avoiding the temptation to edit when necessary. Shots of apes swinging through woods, a long take on top of a spinning gun on of a tank and the film’s vertigo inducing climax at the top of an under construction skyscraper are all wonderfully staged (and may look even better in 3D – I only saw a 2D showing).

Reeves and his screenwriters also try to keep the balance of brooding atmosphere through dialogue heavy scenes and action sequences that made Rise such a satisfying film with great success. Though at 130 minutes, Dawn is perhaps a little too long (the final third especially does seem do drag at times) when the action happens, the film does truly deliver, with some ferocious battle scenes of ape (occasionally on horseback!) vs. man.

The age old story of two groups that severely struggle to trust one another living a tense co-existence is not exactly new and I am afraid to say the contrivances that the narrative seems happy to diligently follow do make Dawn of the Planet of the Apes slightly predictable and there are some moments that seem a little too clunky or contrived, detracting perhaps a little of the potential tension. However if you are going to use a generic narrative, use it well, and that is exactly what Matt Reeve’s film does from start to finish, with an ending that is perhaps a little bleak, but brings satisfying closure to this narrative, while tantalisingly setting up the potentially spectacular part three.

Though a tad generic in narrative, Dawn of the Planet of the Apes uses it conventions very well to create a moody, brooding, involving and visually spectacular blockbuster that perfectly combines brain and brawn.