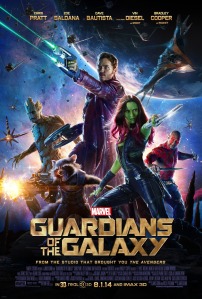 After being abducted from earth as a young child 26 years ago, Peter Quill (Pratt) – who now likes to be called ‘Star-Lord’, is a thief trying to steal a sphere like object that he believes he can sell to make himself rich. However, unknown to him it is an ‘infinity stone’, an all-powerful object wanted by Ronan the Accuser (Lee Pace) that can give him the power he needs to reign down some kind of destruction. Ronan sends his assassin Gamora (Saldana)  to retrieve the stone from Quill at the same time that a mutant raccoon called Rocket (Cooper) and a tree-like alien Groot (Vin Diesel) make a bumbling attempt to capture Quill for the bounty on his head. The four of them however get arrested and are put into a galactic prison called Kyln. The four of them and a fellow inmate known as Drax (Dave Bautista), whose sole purpose is to extract vengeance on Ronan for killing his family, form an uneasy alliance and escape. However, escaping prison is only the start as this group of misfits must stop Ronan from gaining the power of the infinity stone and become the ‘guardians of the galaxy’.

I expect that plot synopsis was as difficult to read as it was to write, and solid plotting and character development is probably not one of strongest points of Guardians of the Galaxy. The fact is that if anyone were to totally dissect this film then not only would they drive themselves mad and be essentially wasting their time, and you would most certainly find plenty of things that do not quite add up, but they would probably be missing the point. Writer/ director James Gunn has made it very clear that first and foremost in this world of superheroes being very serious he wanted Guardians of the Galaxy to be fun.

Well, in my view Gunn certainly achieves his aim as what Guardians of the Galaxy may lack in logic and coherent storytelling, it makes up for in self aware laughs and pure popcorn entertainment (though that is a metaphor as on a personal note I am very much against eating that disgracefully noisy ‘food’ in the cinema). With so many good guys, bad guys and literally an entire universe of communities and cultures to establish, the 121 minutes just flies by at a breakneck speed never giving us a chance to really question the tried and tested ‘macguffin’ storyline that essentially drives the narrative. We are given plenty of exposition in the first 30 minutes, though if you missed it that does not matter too much.

What also for me is part of what makes Guardians of the Galaxy such rousing entertainment is the inspired casting decisions. The characters themselves are complete contradictions of one another, and Gunn and his co-screenwriter Nicole Perlman take maximum advantage of this with snappy dialogue delivered by a cast that share chemistry and charisma in equal measure. Admittedly (and perhaps necessarily) the character’s back stories are a little rushed, but we are given enough to root for them and the great performances elevate the slightly flimsy character development. Chris Pratt’s vocal performance in The Lego Movie should not be underestimated and here he proves that he has the credentials for the big league of leading men after an earlier career as the ‘overweight slacker friend’ (though he was by far the best thing about Delivery Man). Okay, so maybe his range is limited, but here his performance is perfect; combining charisma, heart and a knack for comic delivery, and he also delivers quite possibly the most adult and disgusting joke I have ever seen in a 12A film.

Guardians of the Galaxy is of course not just about one man and the rest of the cast also deliver. Zoe Saldana is predictably solid while Dave Bautista proves that is not just Dwayne Johnson that can elevate themselves from straight to DVD action b-movies, with a performance that demonstrates a knack for delivering comedic lines very well, and he also elevates his character’s admittedly basic back story. Likewise, despite being purely CGI Rocket and Groot are great characters; Bradley Cooper’s vocal performance is very energetic as Rocket (possibly his best performance so far; I am sure there is no coincidence that it is a performance where we never get to see his smug face) and the animation of Groot provides in my view the most emotional substance of the film.

The supporting cast of surprisingly big names do not fair so well; Lee Pace’s Ronan the Accuser feels just like a generic bad guy and there is not enough of Karen Gillen’s genuinely nasty and intriguing Nebula. Meanwhile Glenn Close, John C. Reilly and Benecio Del Toro feel more like marketing tools and Michael Rooker certainly enjoys himself as the blue faced Yondu, but is very much there purely when the plot needs him to be.

Arguably, with a budget of apparently $170million Guardians of the Galaxy should look good, but Gunn and cinematographer Ben Davis make sure that each world the narrative visits looks different from the other. Each set is well designed and varies between clean and shiny to dirty and dark depending on the setting. Likewise the action sequences are a genuine thrilling spectacle, though as ever it is hard to genuinely keep track of who is shooting down whom, the aerial sequences are genuinely thrilling. Well they are in 2D; I cannot speak for the film in 3D.

From start to finish, Gunn makes sure the tone is consistent, meaning that there are laughs to be had in every scene. Guardians of the Galaxy may not be a film that lives long in the memory (and certainly is not the 32nd best film ever made as at time of writing it apparently is on the imdb top 250), but it knows its flaws and this self aware humour at how ridiculous the whole thing is, is part of the reason why it is two hours of pure escapist entertainment. Also I doubt any other super hero film will feature such an eclectic (and very effectively used) selection of 70s songs in its narrative. Though here they are more Guardians of a Planet that Looks like a Very Clean and Shiny Hawaii, in the now inevitable sequel I am sure they will truly earn their title. I am also pretty sure that J.J. Abrams will be watching this and taking a few notes.

Fun and frantic; though Guardians of the Galaxy certainly has its flaws, Gunn’s predominantly perfect judging of the film’s tone and the note perfect performances (both physical and vocal) makes it one of the year’s most purely enjoyable blockbusters. Saving the universe has never been such fun!