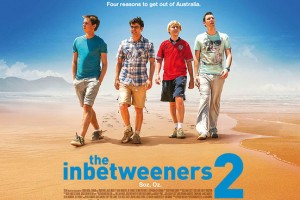 Since leaving school, socially awkward Will (Bird) is being bullied just as much at University, while best friend Simon (Thomas) is in a relationship from hell with Lucy (Tamla Kari) who seemed perfect when they met on the boys previous holiday but has turned out to be a total psychopath. While gullible idiot Neil (Blake Harrison) is still exactly that. They get an email from Jay (Buckley) who is now living in Australia, apparently working as successful DJ called “DJ Big Penis” and getting all women he wants, inviting them to join him. With their lives being pretty rubbish, the three of them decide to travel to Australia to surprise Jay where they discover that Jay may be slightly exaggerating (as usual). With the opposite sex being the main motivator as usual, the four of them decide to go on a backpacking holiday across Australia and, naturally, all hilarity ensues!

So here we go again! When a film is the biggest grossing British comedy in the history of the UK box office then a sequel will happen, the accountants and money grabbing big bosses will demand it. Before accusations of cynicism and snobbery come my way, let us first establish that I really liked the TV series, even if the third series perhaps dipped in quality slightly. Then the film came along and the whole small to big screen transition and the structural narrative differences that entails were embarrassingly jarring, with some very poor writing, but it had some very funny moments. The show’s creators Damon Beesley and Iain Morris (who once again solely write and this time are on directing duties too) have insisted that this is the last film, but record breaking box office returns may overrule them.

Beesley and Morris certainly have a bigger budget this time around, and it shows with an opening sequence that spoofs Harry Potter and a flashy visual accompaniment to Jay’s email. Though well made, neither work particularly well and really feel quite out of place in a film that is unfortunately a long way from the standard of the excellent TV series. Though Beesley and Morris may have slightly ironed out the jarring clichés of the first film, crucially number two just isn’t that funny. The humour feels gross for the sake of it, almost showing a lack of creative invention from the two writers.

There is nothing wrong with crude humour, and the quality of the writing and familiarity of the characters in the TV series all worked, but often with this film it feels lazy. I appreciate the desire for the film to feel cinematic, but it seems in trying so hard to do so Beesley and Morris have almost forgotten the formula of what made the TV series so good. Sometimes the swooping camerawork feels like film students playing with their new movie maker programme than the work of creative film makers. Ultimately it is an impossible balance and proves that it would have been better if this film simply did not exist, and I am sure if the first film was not so staggeringly successful then that probably would have been the case.

There are laughs to be had, and these can often be found predominantly in the more dialogue heavy scenes, the occasional cringe inducing moments or swipes at the true nature of gap year students, but these are very few and far between. In what almost feels like the film’s big set piece; the trip to Splash Planet, the verbal and visual gags just feel lazy and like a broken record.

Though the plot is predominantly driven by Will and Jay’s lust for individual members of the opposite sex, the main focus this time is on the friendship between the four of them. Avoiding the awful clichés of the first film and focussing solely on the four character’s friendship is admittedly a very good idea. However the quality of the writing or acting is simply not good enough to have the desired emotional impact of the film’s final third, which is admittedly refreshing in concept but ultimately rather boring and uninvolving in execution. The film itself is quite a laborious watch and actually feels far longer than its actual 96 minutes. Perhaps worth a watch on TV, but paying to see this at the cinema (and so, so many already have) will only lead to another sequel that will tarnish the memory of the TV series even more. So I advise those that haven’t already not to bother!

More proof that it is often the accountants that are essentially the filmmakers, The Inbetweeners 2 is a lazy sequel too far. The film’s few funny moments only serving as a depressing reminder of just how good the TV series was and perhaps how good this could have been.