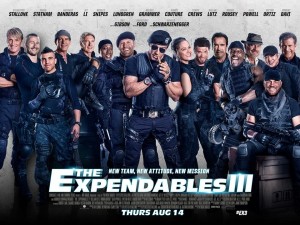 On their latest job, Barney (Stallone) and are sent to Somalia to hunt down a notorious arms dealer and intercept a weapons delivery. However they discover that this mysterious arms dealer is Conrad Stonebanks (Mel Gibson), a former founder of The Expendables who went rogue and Barney thought he had killed. After the team narrowly escape death, Barney retires his current team as he wants no more blood on his hands and so hires a younger, fitter and more tech savvy team on what is set to be his most personal and dangerous mission yet.

Many have criticised and taken quite a severe disliking to these films starring Stallone and his fellow ageing action heroes, and though I cannot really disagree with the criticisms, I will still happily defend both of the first two Expendables films. I and a few people I know have a theory that with the first film Stallone wanted to make a serious action film, and then, realising how silly it all was, went for unashamedly cheesy comedy with the stars referencing each other’s films and a constant barrage of one-liners (all brought to a crescendo by Chuck Norris’ unforgettable appearance). This worked in my view, and both, films though hideously flawed, were great fun.

Well, now we have The Expendables 3 and it seems Stallone (who is the boss on these films) has tried to take a different direction yet again. Being at the third instalment, we are very much in franchise territory, and it seems those making The Expendables 3 seem to have forgotten the whole point of the original film, and it is very much to the detriment of part 3. We now have an even lower certificate, an attempt to introduce younger members to the team and an outrageously long running time of 126 minutes. For me personally the whole point of The Expendables was that we the audience and the ageing cast reminisced nostalgically about their heyday and had great fun along the way. We didn’t need character development because the actors and their careers were essentially the characters and we got to see them reference their own and each other’s careers and, in the case of The Expendables 2, with hilarious results. Though we have Banderas, Ford, Snipes and Gibson joining the cast list, and they all have fun, but sadly they, along with the remaining line up, just all seem sadly sidelined and this in my view truly makes The Expendables 3 a disappointment. Trust me; I take absolutely no pleasure in saying that.

Whose actual idea it was to get younger cast members in I of course have no idea, but the film could have well and truly done without them. Though it means Glen Powell’s tech wizard can do some baffling and quite frankly very lazily written things with technology when the plot demands it, they make the film baggy and often quite boring. This is not the fault of the actors; with the exception of MMA fighter Ronda Rousey (who is quite frankly appalling) they all do adequate acting jobs and certainly look the part. Not only could 30 minutes have been cut off the film, but we could have then had more of the old guard together. They proved in the previous films and the few scenes they get in part 3 that they have great chemistry and are happy to mock themselves, which as I said earlier; for me was the whole point of these films, but yet Stallone and fellow screenwriters Creighton Rothenberger and Katrin Benedikt seem to have tried to make things more serious, but ultimately have just made the whole thing often very boring.

There are of course redeeming features; the new (old) additions are all enjoying themselves (Snipes a bit mental, Banderas even more mental, Ford very grumpy and Gibson scenery chewing as if his life depended on it) and they all get the occasional one-liner or real life references such as Snipes’ tax evasion or less than subtle jibes at Bruce Willis. Though after being extremely watchable in the first third, Snipes’ character is pretty much forgotten about like everyone else. Things improve dramatically when a loud shirt wearing Schwarzenegger turns up for the occasional scene (even referencing previous films of his at one point) and Statham gets the occasional good line. However these moments are very few and far between. For me a serious lack of Statham is a major factor in why this film is quite a laborious watch at times.

However this is not enough, and only serves as a depressing reminder of the potential The Expendables 3 had to be the year’s best and most outrageously fun action film. This entire cast can be very charismatic screen presences when given the cheesy lines and certainly share great chemistry, and it upsets me that this was not utilised! Even the action sequences are not particularly well put together, with never any real sense of danger or tension, and certainly no fun. The 12A rating making things seem like an episode of the A-Team with bullets flying everywhere, but only the bad guys getting shot with one single bullet, and certainly no blood whatsoever. With the exception of a couple of tame punch ups that feel more like handbags at dawn, it is pretty much just bullets flying (and rarely hitting anything), with no real old school brutal violence. I of course do not want violence for the sake of it, but I thought the idea of these films was for the violence to be more old school in style and when a character took a hit or a fall, it actually hurt. Here they are like indestructible superheroes, with the violence getting repetitive and boring very quickly.

These films are of course never particularly original on plot or great scripting, but when a film is as dull and serious in tone as The Expendables 3 is then this shows ever more. Exposition dialogue is embarrassingly clunky and the serious moral standpoints seem to constantly contradict one another, just making a certain point when it fits in with the plot. Though the film’s climax may be frantic and have a higher body count than the previous films, things do feel painfully predictable, with it sometimes impossible to tell who is shooting who and the violence way too comic and tame. It is a surprise that a film with such humongous amounts of gunfire and a high body count is actually so boring. Chuck Norris is very sadly missed!

A badly misjudged film, and on a personal level for me, one of 2014s biggest disappointments; in forgetting the original point of The Expendables, The Expendables 3 is an overlong and over serious film that seems to take the fun out of the franchise with often very boring results. The few good moments the film did have only served as a bitter taste of disappointment as to how enjoyable this film SHOULD have been.