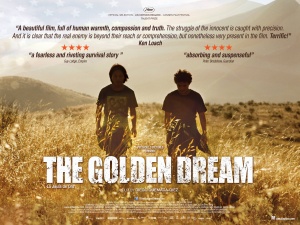 Three teenagers from Guatemala; Juan (López), Sara (Martínez) and Samuel (Carlos Chajon) decide to escape the poverty of their home country to cross the border into Mexico and then on to the United States to seek a better life. On the way they meet a Totzil native called Chauk (Domínguez) who cannot speak Spanish, and despite disapproval from Juan, Chauk joins them while Samule decides after their first setback to stay in Guatemala. Now the three of them embark on a journey with many setbacks, dangers and personal battles to try to seek a better life.

Though in isolation it may be a story that has been told so many times, it is how the story is told in Diego Quemada-Díez’s directorial feature length debut that makes it a truly engrossing film. The unflinching matter-of-fact depiction of this harrowing tale that occurs on a daily basis to millions of migrants has gained deserved comparisons to Ken Loach (judging by the quote on the poster the great man himself seems to like this film and approve of its style) and is what in my view makes it one of the best films of 2014.

Before making the The Golden Dream Quemada-Díez interviewed countless migrants who had taken the exact same journey that the protagonists embark on, and it is the unashamedly matter of fact and very often brutal depiction of realism that makes The Golden Dream a reminder of how cinema can be such a compelling and heartbreaking art form. There are some truly shocking developments in the plot as our characters are at the helpless mercy of both criminals and those in positions of authority, but they have to accept it as a fact of life. It is this acceptance that makes The Golden Dream both chilling and heartbreaking to watch. A more commercial film would have the tendency to go for patronising melodrama, but Quemada-Díez’s film, like the characters accept it and move on, as they have to.

What also makes The Golden Dream such an exceptional piece of cinema is that it combines heart with devastating realism. The film’s main characters demonstrate the flaws and imperfections that we all do, and of course they are just four out of millions of people with the same goal (something which the film also deals with very well), but yet we truly care about their plight and want them to realise their dream. We get very little dialogue or exposition, but The Golden Dream is a film that proves you do not need constant dialogue for engaging character development or to tell a powerful story. Wonderful shots and long takes as well as visual motifs (especially the snow) make sure that The Golden Dream also feels genuinely cinematic without detracting from the very real plight of its central characters.

Perhaps the story could be accused of being slightly contrived in terms of what happens within the narrative to the characters. However, as with anyone embarking on this journey, you are likely to be the victim of circumstance as much as you are the benefactor, with the scenes when our characters being the victim of circumstance being some of the most genuinely tense and brutal in a film this year. The Golden Dream is a film that intentionally frustrates you and breaks your heart, but does it in way with absolute genuine integrity that by the time it gets to its very satisfying conclusion it is impossible not to feel deeply moved.

A deeply moving and involving story told with absolute integrity and an unflinching eye for devastating reality. The Golden Dream is an essential piece of cinema and one of the very best films of 2014.

An extremely passionate and (semi) opened minded film reviewer, with a hint of snobbish.
View all posts by MoodyB →
This entry was posted in All Film Reviews, The Best of 2014, World Cinema and tagged Carlos Chajon, drama, entertainment, film, film review, foreign films, movie review, The Golden Dream, world cinema. Bookmark the permalink.