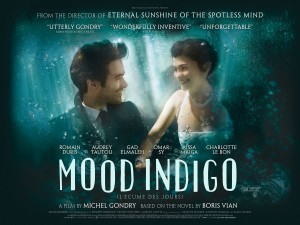 After his best friend Chick (Gad Elmaleh) and his chef/ lawyer Nicolas (Sy) find love, wealthy inventor Colin (Duris) decides to give up his life as a bachelor and that he too wants to find love. At a party he meets Chloé (Tautou) and the two share an instant spark, and six months later they are very much in love and get married. However, upon discovering that Chloé is dying from a lily growing in her lung, Colin uses all his wealth and imagination to try to save the life of the woman he loves.

Sometimes directing a film that is held in common high regard can haunt a director as every subsequent film is compared harshly to the standard they set with that celebrated effort. Eternal Sunshine of the Spotless Mind is one such film that continues to lurk like a giant shadow over every film that Michel Gondry directs and the question mark over whether he can produce without a script written by Charlie Kaufman. This may be slightly unfair, but it is then up to a director to prove the doubters wrong.

Though I do not perhaps hold ESOTSM in such high regard as some, with Mood Indigo Michel Gondry seems to continue to prove in my view that the former music video director may have all the visual flair and imagination, but just struggles to incorporate that into a solid feature length narrative of any discernible substance. In the case of Mood Indigo, it is based on a book and Gondry has a co-writer, but yet he still struggles to maintain the audience’s interest when the novelty of the inventive visuals wears off.

Reminiscent of Gilliam at his best, the film’s opening twenty minutes are bustling with energy, incredible detail and genuinely hilarious gags. Blending CGI, stop motion, a person dressed as a mouse (but is the size of a mouse) that lives with Colin and physical performances from the actors, Gondry toys with the laws of physics to great visual and comic effect. The soundtrack too is as eclectic as it is visually effective, featuring a great score from Etienne Charry and using the likes of great music from Duke Ellington to great effect.

Once the narrative then takes over is when Mood Indigo starts to fall a little flat; it is of course at its heart a simple love story with what are admittedly very relatable themes, yet Gondry struggles to maintain the balance and some scenes often feel like unnecessary filler and try the audience’s patience. Some visuals feel like they are weird just for the sake of it, proving to me that perhaps Gondry struggled to fill the 94 minutes (though apparently there is a much longer 131 minute cut too).

The balance between sentimentality and dark or comic humour shifts so rapidly it is hard to feel emotionally involved with the characters and the increasing emphasis on melancholic sentimentality in the film’s final third feels rather forced with all this leading to a story that feels quite uninvolving at times. Likewise a subplot involving Colin’s best friend Chick and his obsession with a philosopher called Jean-Sol Partre may be a less than subtle joke that is at first amusing, but feels like one that is overdone.

There are of course still great pleasures to be had from the film’s constantly inventive visuals, and there are potentially interesting visual metaphors aplenty as the gravity and law of physics defying world around our characters seems to change with their mood and the tone of the narrative. This may look good on the screen but as impressive as the set design is, there is still ultimately a lack of any real substance. Likewise, it has been argued that the film works on many levels as to what is reality and what is not and to what context the visual world we see on screen means to the actual protagonists. These are interesting ideas and only Gondry knows the true answers, but to question that too much would in my view by giving Mood Indigo more credit than it perhaps deserves.

In the leading roles and what is now their fourth film together, Romain Duris and Audrey Tautou share a great on screen chemistry, and though she may have little to do at times but look like she is feeling sorry for herself, Duris is his usual charismatic self and his performance certainly elevates our emotional involvement with the narrative. In a supporting role as Colin’s cook and lawyer, Omar Sy is also excellent. Michel Gondry is without a doubt a director with flair and imagination, and Mood Indigo is worth watching just to see what his imagination has unleashed this time, but what is frustrating is once again his obvious lack of discipline when telling a story.

As visually inventive as his other films and equally as frustrating to watch as an actual narrative film; Mood Indigo has many enjoyable moments to be had from Gondry unleashing his imagination, but his seeming inability to balance visual flair and emotional substance once again render’s yet another one of his films a hollow and forgettable experience.