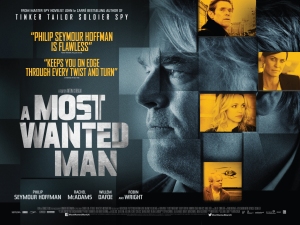 Chechen immigrant Issa Karpov (Grigoriy Dobrygin) enters Hamburg illegally, and his family links to terrorist organisations immediately bring him to the knowledge and attention of a covert German intelligence team led by Günther Bachmann (Hoffman) whose team have him under surveillance. However, Bachmann intends to use Karpov as an unwilling and innocent pawn in a game to catch a far bigger target. With American and German secret agencies seeing Karpov as a potential terrorist, Bachmann faces a race again time as he has to trust his own judgement that Karpov is indeed not a terrorist and can unknowingly help him catch this far bigger target he has devoted years to catching.

Whenever you get a film where you have famous American or British actors but the film is set in a different country (in this case Germany) with the characters being natives of that country but the language of the film is English there always seems to be uproar. I am as guilty as everyone for really slating actors when their accent is truly appalling, but in many cases (A Most Wanted Man being one of those) the accents may not be note-perfect, but to criticise this film on that basis is petty and pointless. The German accents from the American cast of the film are adequate, and in my view no way hamper anything about A Most Wanted Man.

I, as I am sure along with many others, would of course prefer A Most Wanted Man to be in German with German actors, but let’s not be naive about this: the economics and market forces of the film industry means that once a film rises above a certain budget it is predominantly going to be in English and feature big name actors doing accents. Compared to the broken English of The Book Thief (one of many problems with that film), at least A Most Wanted Man is consistent with all dialogue between German characters being in English and never is there the occasional “Nein.” Admittedly the dialogue between Hebrew speaking characters is a little inconsistent, but all these are in my view very pernickety and pointless criticisms of what is a very well made and acted, if slightly flawed and over conventional old school spy thriller.

This being based on a John le Carré novel, the four words Tinker, Tailor, Soldier, Spy are plastered all over the marketing, and director Anton Corbijn (maybe under pressure from the suits in marketing) certainly tries to create a similar mood and pace. However, A Most Wanted Man is set in a different world; a post 9/11 world and all the paranoia and suspicion exclusive to that time, and Corbijn and screenwriter Andrew Bovell explore that very effectively in a film that is just as much about mood and atmosphere as it is actual plot. There is a dark atmosphere of tension that hangs over the entire narrative, and even though the plot is in some ways highly conventional, it is the effective creation of that atmosphere by Corbijn, Bovell, DoP Benoît Delhomme and composer Herbert Grönemeyer that makes A Most Wanted Man a very compelling viewing experience that explores and depicts its themes very effectively.

We are not spoon fed anything, and Bovell makes sure that we learn the facts along with the characters. There is also very little dialogue given to character development, and there is a reason for that which makes the ending of the film even more effective. There is admittedly a very basic plot that the narrative is built around and at times the extremely slow burn pace of the 122 minute running time does venture into filler territory.

Holding everything together is a superb leading performance from the late Philip Seymour Hoffman; though his chain smoking, heavy drinking protagonist is in many ways a walking cliché, Hoffman immerses himself into the character to provide substance and a back story that the script just doesn’t provide. It takes a great actor to elevate material that is at times conventional, and Hoffman’s performance undoubtedly makes A Most Wanted Man a far more immersive and involving film than if this were a less talented actor in the leading role. It serves as yet another reminder just how much this man will be sorely missed and that he was one of the very best at his craft. The supporting cast are also excellent; many have criticised Rachel McAdam’s performance, and it is a role that is very different from her usual but her naive left wing rich girl lawyer character that is completely out of her depth actually suits her performance. Meanwhile Willem Dafoe is always a safe pair of hands and provides the necessary screen presence as a shady banker. The supporting cast that play Bachmann’s superiors, whether that be Robin Wright’s American intelligence officer or Rainer Bock’s conniving German intelligence officer are also excellent. Meanwhile it wouldn’t be a mainstream film set in Germany without the ever dependable Daniel Brühl, even if he doesn’t really have much to do.

As the slow burn plot develops to its climax it tends to never truly deviate from the conventions it is happy to embrace from the start, rendering it perhaps slightly predictable. However this is a film as much about themes as it is plot, and the excellent performances and the atmosphere that Corbijn produces effectively examine these themes, making A Most Wanted Man an effectively immersive and engaging film, and its climax as effective as it is appropriate. It also serves as a rather welcome reminder that you do not need mindless action set pieces to create an effective spy thriller.

Though it unashamedly embraces the clichés and conventions of the genre, thanks to great direction and a superb leading performance A Most Wanted Man is an engaging and immersive old school spy thriller.