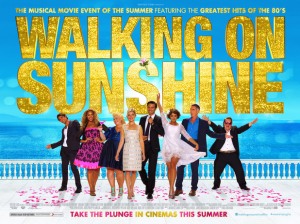 Taylor (Arterton) travels to Italy for the wedding of her sister Maddie (Scholey) only to discover that the man Maddie is marrying, Raf (Giulo Berruti) is a man she shared a holiday romance with three years ago. Maddie and Raf deny all knowledge of each other, but denying their mutual feelings for each other proves increasingly difficult, while Maddie has to fight off the advances of her ex-boyfriend Doug (Wise), who will stop at nothing to win her back. To further enhance the mood; they are in sunny Italy and constantly feel the need to start singing cheesy 80s songs.

It is always a bit of conundrum reviewing, and indeed saying anything bad about a film that knows exactly what it is. Like so many musical films that are a wafer thin narrative written around songs, Walking on Sunshine is complete and utter rubbish. It has a horrifically basic story, the spoken dialogue is horrendously clunky, and the acting is even worse from a cast that are obviously enjoying their all-expenses-paid holiday way too much. Visually the film is not very well made either, with very poor camera work and editing.

However, the intentional lack of effort on all these things proves that this film well and truly knows that it is rubbish, but criticising it for these things is a waste of time as all Walking on Sunshine ever sets out to be is Mamma Mia with 80s songs. Though it doesn’t quite achieve the so-bad-it-is-good levels of Mamma Mia or the genuine uplifting enjoyment of Sunshine on Leith (mainly down to a lack of star wattage and the songs not being quite as good), Walking on Sunshine does just about serve its purpose.

Walking on Sunshine warns you exactly what film it is before it happens; it is an unashamedly feel good romp featuring 80s songs. Basically, the plot, the trailer, the list of songs and the poster of the cast looking unnaturally happy like they all have sticks up their backsides means that Walking on Sunshine reviews itself.

The most frustrating thing is that this is a film that could have been better, especially in terms of dialogue, story and acting, even though the poor acting does bring unintentional laughs at times. Make no mistake, Walking on Sunshine is lazy and cynical film making of the highest degree and writer Daniel St. Johnston has one of the easiest gigs he will ever get. This is a film that could have been written by anyone and the abysmal script and story is testament to that. Anyone who has studied film or is tirelessly trying to break into the film industry, then please avoid this as you will feel very down heartened by what you see. In fact, in some ways Walking on Sunshine serves as a horror film to all those budding but struggling filmmakers out there, when thought about it is certainly far scarier than so many actual ‘horror’ films these days!

If a little more effort had actually been made with Walking on Sunshine instead of the makers just assuming the popularity of the songs the narrative uses would simply be enough to carry the total lack of effort made with every other aspect of the film this could have been a real treat. Walking on Sunshine only had moderate success at the box office, and that is what it truly deserved for its producer’s complacent attitude.

However, the fact is that the deal breaker for a vast majority of people is the songs. If you want something unashamedly cheesy, light, fluffy and you like cheesy 80s songs, then Walking on Sunshine serves its purpose. Everyone else, just avoid.

There really is nothing else I can say.

A film made with cynicism, laziness and complacency in equal measure; Walking on Sunshine just about serves its supposed purpose with an unashamedly tacky 95 minute music video of cheesy 80s classics, but it is a shambolic demonstration of the utmost basic levels of all areas of film making.