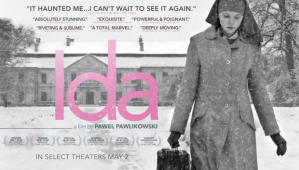 In Poland in the 1960s, before taking her vows to become a nun, Anna (Trzebuchowska) is ordered to see her only living relative, her auntie (Kulesza) and discover what happened to her family during World War II. Anna meets her auntie, named Wanda, an alcoholic judge and former prosecutor under the Stalinist regime who informs Anna that her real name is Ida and she is a Jew. The two of them embark on a trip to discover the history of Anna’s immediate family, uncovering dark secrets that have a profound and permanent effect on both of them.

Pawel Pawlikowski is a director close to my heart as he directed Last Resort, a film set in my home town of Margate and depicted it as some nasty inescapable camp for UK immigrants, and for an added bonus it starred Paddy Considine. He then directed the excellent British film My Summer of Love (also with Considine), but then he directed the critically panned The Woman in the Fifth. Now he is back and has returned to his native Poland for a dark drama that at only 82 minutes is very unapologetic for its matter of fact, subtle, suggestive and often ambiguous method of presenting its narrative.

Ambiguous storytelling where the narrative simply tells its story and lets the audience fill in the blanks and the explanations for why characters act in certain ways is certainly risky; be over ambiguous in your story telling and your film risks being pretentious style-over-substance claptrap that is cold and uninvolving. Thankfully in my view Pawlikowski manages this very fine balance perfectly to create a film that is profoundly moving, deeply haunting and emotionally engaging, and made even more so by his approach to how he presents the narrative.

Pawlikowski always keeps things subtle, but the consistent subtleties only make the drama more powerful. The very lean running of Ida is appropriate; this is a story that could have been dragged out and expanded into a 150 minute film, but then it would lose its raw emotional power if it was. So many films these days, especially mainstream films, want to shove emotion down our throats with excessive exposition, overacting and intrusive non-diagetic music that often serves to produce the opposite of its intended purpose.

Pawlikowska’s approach is very much refreshing as it treats the audience with respect and Ida is a film where there is rarely a raised voice, crying or any obvious outburst of emotion.  All the heartache, pain and loneliness is in the subtext, and therefore far more powerful and haunting. This pain is very much there within the characters, but the fact it is never blatantly shown adds a powerful atmosphere to the narrative that consumes the audience and makes the film far more engaging than if everything were spoon fed. Indeed, one of the film’s most powerful and narratively important scenes is in fact one of its shortest, but is even more popowerful and haunting for exactly that reason

Though Ida is set in a very specific time in history, the emotions the characters experience are universal, and this is one of the reasons why the characters of Anna and Wanda so deeply engaging. Both actresses give incredible performances that perfectly compliment Pawlikowski’s subtle approach to the narrative, their facial expressions encapsulate so many emotions, but yet they are done with an incredible subtlety, only further enhancing the emotional involvement of the narrative developments. Though both Anna and Wanda are trying to discover what actually happened to Anna’s parents, they both experience so many other emotions and feelings, but Pawlikowska never over emphasises why. There are never overly complex explanations for why the film’s characters do certain things, but the motivations behind their actions are often grounded in very universal emotions that we can all relate to, even if it is impossible to fully relate to their unique experiences.

Whereas once it was perhaps simply down to budget constraints, now to make a film in monochrome is very much a stylistic choice open to criticism. However, in the case of Ida it works perfectly as the beautiful monochrome shots only enhance the desolation and loneliness that the film’s two main characters feel. Whether it was intentional to cast an actress with such distinctive, beautiful and expressive dark eyes as Agata Trzebuchowska I of course do not know, but they only serve to complement the black and white cinematography.

For me the best dramas are the ones that haunt you afterwards as you piece everything together as a whole as opposed to while watching individual moments, and though Pawlikowski’s subtle approach may not appeal to all, it makes in my view for one of the year’s best dramas.

A beautifully shot, superbly acted and wonderfully told drama; Ida is intelligent, subtle and deeply powerful storytelling of the highest order, and a drama that will haunt the subconscious of the viewer long after it has finished.