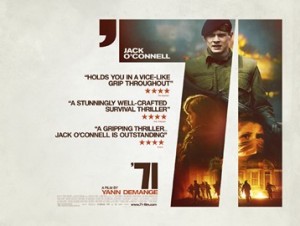 During 1971, at the height of the troubles in Northern Ireland, a British battalion are sent to Belfast to support the overstretched local police force. However when providing backup for a raid by the police a riot breaks out with the police and soldiers forced to retreat, however one soldier, Gary Hook (O’Connell) is left behind in the melee. Managing to escape from the locals whose only intention is to kill him, Hook faces a deadly game of survival in an unfamiliar city, with it impossible to know who is friend and who is foe.

Ever since appearing in Skins Jack O’Connell has certainly proved to be a bit of a rising star and cementing that with his excellent and physical performance in Starred Up this year. O’Connell may be an actor that does not have the most extensive range (he was very miscast in 300: Rise of an Empire), but when he plays to his strengths then he is a superb screen presence and his trademark committed and physical intensity is perfect for Yann Deamange’s taut and tense thriller.

The troubles of Northern Ireland have been depicted many times in film with differing levels of success, and Deamange and screenwriter Gregory Burke show respect for the subject matter and its complexity. Belfast is a warzone, but it is far more complex than that, our protagonist knows quite literally nothing about Belfast and what is happening there, when he find himself alone in this city he is running from an enemy but yet without knowing who the enemy truly us and why. It is a sense of confusion, bemusement and fear that O’Connell captures perfectly.

Deamonge’s film is brutal and cynical from the start; the film opens with a brutal, no holds barred boxing match between Gary and a fellow member of his battalion and then we have a hand-held camera shot sequence of an unforgiving army training exercise in the bleak and damp countryside. It is a thematic and visual tone that remains throughout the deeply intense and atmospheric narrative until its very appropriate conclusion.

Though admittedly some of the narrative developments of ’71 do at times feel a little contrived, this is ultimately narrative cinema and a fictional story. I am not saying this is necessarily forgivable, but like with clichés, it is what the screenwriter, director, actors and so on do with the contrivances and clichés that are often the difference between a bad film, a good film and a great film. In the case of ‘71 the raw intensity of both the performances and film’s atmosphere make for a truly gripping drama despite the occasional contrivance in the narrative.

As the shaky hand held camera captures the riot that Gary gets caught in and then his subsequent isolated battle for survival it makes for a deeply raw and unflinching viewing experience of deep intensity. As well as being a great thriller, ’71 does not just choose its setting out of convenience; Gregory Burke’s script is written with intelligence that contains deep respect for its complex subject matter but also a deep cynicism for how conflict is sometimes controlled by those who are supposedly peacekeepers. I won’t reveal any more as that would be spoiler territory, but Burke sees these ideas through to the very end and it adds another element that only serves to complement the deep atmospheric tension within the narrative.

An intelligently written and genuinely tense thriller that could certainly teach Hollywood a thing or two; ’71 is the perfect combination of a fictional story that shows deep respect to its very real setting and is a film that truly grips from start to finish.

An extremely passionate and (semi) opened minded film reviewer, with a hint of snobbish.
View all posts by MoodyB →
This entry was posted in All Film Reviews, BAFTAs 2015, British Films, The Best of 2014 and tagged action films, drama, entertainment, film, film review, jack o'connell, movie review, thriller. Bookmark the permalink.