THE BURFORD TOP 10S: THE FILM DEATHS OF SEAN BEAN

Yorkshire’s Sean Bean has had a prolific career on both the big screen appearing in a diverse (i.e. some good and some really bad) range of films, but one thing that has remained consistent is that the characters he plays more often than not, die within the narrative.

Of course Sean Bean was always going to face a disadvantage with regards to the likely mortality rate of the characters he will play as he is a British actor and so therefore more likely to play the bad guy. There has even been the Don’t Kill Sean Bean campaign because of the amount of times his characters snuff it!

Though of course he does not always kick the bucket in his films, he does in so many and some of his deaths are particularly memorable for various reasons. Though I know I am not the first to compile a list like this, here are the 10 I regard as the most memorable, some are sad, some are heroic, some are hilarious and some are just downright bizarre. Naturally, this list includes the occasional spoiler.

PS, before anyone moans at me for not including Game of Thrones, this is my top 10 film deaths.

Sean Bean gets fatally shot in plenty of films, but of all of those his death in the atrocious Outlaw is for me the most memorable simply because it is plain stupid and a demonstration of the fact Nick Love just cannot write very good screenplays. Sean Bean’s Danny Bryant and his group of vigilante’s who decide to stand up to police corruption and brandish their own form of justice find themselves setup and outnumbered. So emerges one of the most badly shot gunfights in cinema history all shot in Nick Love’s trademark mint green cinematography. During a shoot out in the woods, Nick Love has no idea how to end it so Sean inexplicably emerges from the cover of a tree walking towards those shooting at him while firing off his shot gun and, unsurprisingly, is met with a shower of bullets. To make things worse, Danny Dyer survives the gunfight.

Asif Kapadia’s beautifully shot drama tells of the tale of two women (Michelle Yeoh and Michelle Krusiec) living in the remote arctic who offer shelter to Sean Bean’s wounded stranger, and as they care for him they both find themselves falling in love with him and fighting for his affections. When Bean and Kruiec’s Anja plan to make a life together, Yeoh’s Siava strangles her and skins her, using Anja’s skin to disguise herself as Anja. When Bean is enjoying a spot of hanky-panky with what he believes to be Anja, the skin on Siava’s face begins to crumble, leaving Sean Bean more than a little shocked. In a state of shock, a completely starkers Sean Bean runs into the baron arctic wilderness screaming. Though it is never confirmed that he snuffs it, I think he does, and it is my chart!

Derek Jarman’s sumptuous tale of the 17th Century painter Caravaggio (Nigel Terry) features a young Sean Bean as Ranuccio, a street fighter who becomes Caravaggio’s lover, but then is accused of murdering Lena (Tilda Swinton), a subject of affection to both of them. After Caravaggio manages to use his connections to free Ranuccio, Ranuccio tells Caravaggio that he did indeed murder Lena that the two of them could be together. Caravaggio takes a knife from his pocket and slits Ranuccio’s throat, and as Ranuccio dies with blood pouring from his throat the two put their arms around each other and have a bit of  a cuddle while blood goes everywhere. Lovely stuff!

In one of the many screen outings for Tom Clancy’s Jack Ryan, in this case with Harrison Ford as the titular hero, who while on Holiday in good old blighty intervenes to stop an IRA attack (as you do) he kills one of the assailants who happens to be the brother of Sean Bean’s character, Sean Miller. Miller vows revenge and so we of course eventually get to the inevitable climactic punch up between Harrison Ford and Sean Bean which happens to take place on a speed boat travelling at quite a pace. After trying to attack Ford’s Jack Ryan with the boat’s anchor, he then leaves it in a not-so inconspicuous place and is then unsurprisingly fatally impaled on it. Just to make matters worse, the boat is on a collision course for a rock, Ford jumps out just in time, leaving Sean Bean’s corpse to go out in a spectacular (and slightly over the top) ball of flames. 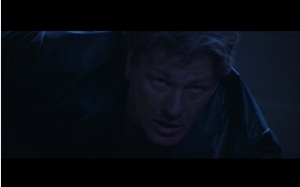 Sean Bean is yet again the bad guy pitched against another Hollywood star (Oh, I wonder how this is going to end?!?). This time it is Michael Douglas’ psychiatrist Dr Nathan Conrad, and Bean’s Patrick Coster kidnaps Conrad’s family, forcing Conrad to get one of his patients to reveal a number which will lead Coster to a valuable gem. Of course the film inevitably ends up with climactic fight in a graveyard between Conrad and Coster to which Coster surprisingly ends up kicking the bucket. However, instead of something unoriginal like getting shot, Coster goes into a hole currently being excavated (big mistake) after Conrad throws the gem down there, the whole thing collapses and Sean Bean is buried alive.

Christopher Smith’s historical romp about a band of knights and a monk sent to investigate a village that is apparently immune to the bubonic plague that is sweeping the country due to apparent sinister and magical goings on is not very good, but it does feature one of Sean Bean’s most memorable death scenes. In a film where many of the characters die, their deaths are all quite dull compared to what happens to Sean Bean (maybe that was contractual?); when the villagers keep Bean and his group prisoners, Bean is tied up between two horses and eventually torn to pieces.

Jim Sheridan’s drama about a bitter battle between a farmer (Richard Harris) and an American tycoon (Tom Berenger) for the ownership of a field is a subdued affair, and it’s most memorable part is at the end of the film when the farmer’s son (Sean Bean) dies. At the end of the film, going slightly barmy, Harris drives his cattle towards a cliff. In trying to stop his father, Sean Bean is dragged down the cliff with them. It is one of his most bizarre moo-vie (sorry) deaths and happened before many people had even herd (sorry again) of him, but remains one of Sean Bean’s most memorable.

Bean gets his chance to play the bond baddie and certainly does so with great relish in Brosnan’s first and arguably best outing as Bond. Of course being the special agent turned bad guy, Sean’s Alec Trevelyan inevitably snuffs it in the film’s finale. After a bit of fisticuffs with Brosnan, Bean unsurprisingly loses and is subsequently dropped from a great height while receiving a textbook Bond cheesy one liner. This being a 12A, his landing does nowhere near the damage it would in real life and he does not die instantly. However, just to make sure the job is done, an entire satellite complex collapses and lands on the still conscious and screaming Sean Bean. 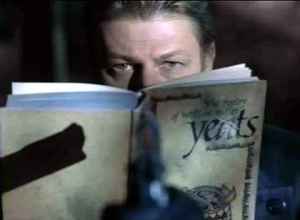 In this action film set in the future, all emotions are suppressed and literature, music and art are banned and Sean Bean and Christian Bale play ‘clerics’ who hunt down and kill anyone who is a ‘sense offender’. It doesn’t take too long for Sean Bean’s Errol Partridge to have a change of heart when he takes a book of poems by Irish poet William Butler Yeats and fails to hand it in. When Bale’s John Preston discovers that Partridge failed to hand the book him, he finds him reading it in an abandoned building. Partridge continues to read and is eventually shot by the merciless Preston, it is however an extremely cultured death scene, and is for that reason one of Bean’s most memorable. 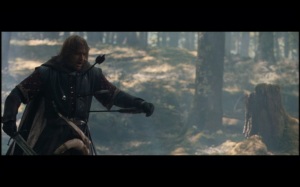 All the most heroic deaths happen in slow motion and take ages, and the death of Boromir is up there with the best of them. While protecting Hobbits Merry and Pippin Boromir is slaying plenty of orcs, but he receives an arrow to the chest from orc leader Lurtz. However he carries on fighting and it takes two more arrows to finally put him down, all in slow motion with Howard Shore’s score getting more dramatic. Though Merry and Pippin are taken away, Bormir also manages to share an emotional conversation with Viggo Mortenson’s Aragorn before finally snuffing it. It takes almost five minutes from the strike of the first arrow to when Boromir takes his last breath, but proving you can’t keep a good man down, Boromir still manages to appear in the next two films in flashbacks.