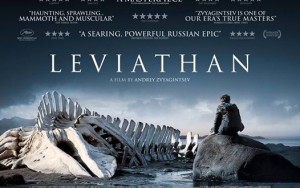 In a small Russian town on the coastline of the Barents Sea, a local man named Nikolai (Aleksey Serebryakov) faces a losing battle against Mer (Madyanov), the local corrupt mayor who wants to take the land of which Nikolai’s house is built. Nikolai receives help from his old army friend Dmitriy, now a lawyer in Moscow, whose plan is to allow Mer to win in court, but then blackmail him with the information of Mer’s deeply corrupt career that he has managed to acquire that would destroy not only Mer’s chances of winning the election in a year’s time, but his entire career. However, both Dimitriy’s plan and his arrival back into Nikolai’s life only causes an increasing dark and tragic turn of events as they continue to battle against the power corrupt politicians and religion have over the state.

Much has been made of the fact Andrey Zvyagintsev’s latest (if you haven’t seen his previous films then, well, just do!) is funded by the Russian Ministry of Culture and is Russia’s official entry for the 2015 academy award for best foreign language picture, but yet is regarded as having deeply cynical depictions of Politics (there is even a picture of Vladimir Putin hanging up in the corrupt mayor’s office). Well, politics and the downright oppressive bullying of those in power is one of the plethora of subjects that Leviathan examines in what is in my view Zvyagintsev’s best film so far.

With its roots in the book of Job and also Heinrich von Kleist’s novella Micheal Kohlhaas, Leviathan is a film that examines some huge issues that affect 21st century society such as religion and politics, but also more personal subjects such as loyalty, family and friendship. These are all deeply and methodically examined throughout the film’s narrative to produce one of the best dramas of 2014. Though Leviathan is most certainly without doubt not the most uplifting of viewing experiences and does not present politicians and religion in the most positive of light, it is a film that respects the intelligence of the audience and is never preachy. The bigger themes and ideas are explored through the experiences of very relatable characters grounded in reality and so making the film far more involving, emotionally engaging and thought provoking.

The film’s main protagonist, Nikolai has as many flaws and imperfections as all of us; he is a drunk, bad tempered and occasionally violent, but he is also a compassionate person who loves his family and has the best of intentions. He is a very relatable character and often simply the victim of circumstance as his narrative journey takes increasingly dark and bleak turns. Though Leviathan may be ultimately a bleak film, it is not just that for the sake of it, there is a deep intelligence and thoughtful assessment behind all the subjects the film examines. Life can be brutal and unforgiving, sometimes through circumstances out of our control, sometimes brought about by our own flaws, the flaws of those we know or indeed both, and Leviathan examines these with a deep intelligence.

It is almost a film of two halves, the first half of Leviathan is more a political drama as Nikolai and Dimitriy tackle the town’s corrupt mayor, while the second half is a far more personal drama as the events of the film’s first half begin a chain of events that change Nikolai’s life forever. All the way through the narrative the subject of religion is always mentioned and it only comes into deeper focus as the narrative develops, raising some deeply profound questions that will linger long in the subconscious of the viewer long after the film has finished.

As with all Zvyagintsev films, Leviathan is wonderfully shot and absolutely beautiful to look at with some striking visual metaphors, but the style only ever is complementary to the substance, and never a distraction. The long takes and static camera only adds to rich atmosphere of the narrative. One of the so called rules of screenwriting is to “show and not tell”, (i.e., description over clunky dialogue) well sometimes the other way round is just as effective, and sometimes the most powerful scenes can be ones described very briefly by characters where the audience has to fill in the blanks and play the scenes in our own minds. Zvyagintsev is a master of economical filmmaking in that he only shows scenes that are essential to the deeper substance of the themes his films are trying to examine. There are occurrences and developments that are key to the overall narrative, but to devote visual depiction of them would waste time when what the viewer actually needs to know is that they happened, and a few lines of dialogue and a visual of the results of that supposed said scene are enough. This allows an already reasonably long running time of 140 minutes to be devoted to the real substance of the narrative, and in fact, sometimes having to play out the scenes in our own minds can make them more powerful and the narrative even more involving.

In a film that features far more characters than in any other film Zvyagintsev has directed the cast all are excellent. As Nikolai, Aleksey Serebryakov is exceptional, emerging as a sympathetic and engaging protagonist. The supporting cast are also excellent, and each character at a certain point plays a key part in Nikolai’s journey, and the friends and family around him are characters with the best of intentions too, but also demonstrating the same number of flaws that we all have, which unfortunately proves to have a profound and sometimes devastating effect on Nikolai’s life. Religion is always a subject mentioned throughout and lingering over the experiences of Nikolai and those around him, either discussed by characters or delivered in sermons of the powerful priest that occasionally meets up with Mer. The words uttered by the priest only serve to add even more thought provoking substance to what is one of 2014’s best and most rewarding films.

Epic in scale and the amount of subjects it examines, yet made with an intimate and deeply involving feel: Leviathan is Andrey Zvyagintsev’s best film yet and tackles a vast array of deeply relevant thought provoking themes and ideas to produce a truly engaging and involving drama to linger long in the subconscious of the viewer.