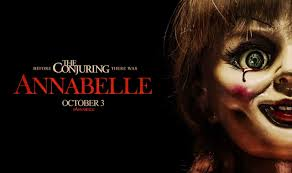 Starring: Annabelle Wallis, Ward Horton, Alfre Woodard Genre: Horror (apparently) Pregnant Mia (Wallis) has a collection of dolls and is delighted when her husband John (Horton) buys her a rare vintage doll. However after one horrific night when their home is invaded by members of a satanic cult who try to summon a demon, and as one of the members is shot dead by the police their blood drips onto the doll, turning it into a conduit for an evil spirit that torments the couple and anyone who enters their home. I for one have never particularly demanded a prequel to The Conjuring as it was the usual dull and borderline comical cheap, tacky and clichéd nonsense that director James Wan churns out these days. However its huge box office return made sure that the accountants demanded one, but with James Wan off directing Fast & Furious 7 he is just producing Annabelle and the director’s chair is taken over by Wan’s regular DOP John R. Leonetti. Well, Leonetti and screenwriter Gary Dauberman have achieved a quite impressive feat; make a film that is even worse than any of the tripe directed by James Wan! Annabelle does not seem to be even made with any effort and is an extremely dull experience that seemingly doesn’t even want to try to be scary or engaging. What is even more soul destroying is that from a supposed budget of $6.5million Annabelle had taken $255million worldwide by 25th November 2014 (imdb). All those of you that saw this it at the cinema: Shame on you! You are only going to encourage them to make more dreadful films like this! There is of course potential here as the design of the doll is quite scary (if inaccurate from what it apparently looks like in the true story that Annabelle is very, very, very, very loosely based on) but the writer and director just do not even put any effort in to any aspect of the film as they do not feel they even need to. Well, the huge box office return proves them to be depressingly right. Annabelle does not even fit into the ‘so bad it is good’ category and does not even have any of the lazy ‘quiet, quiet, quiet, quiet BANG!’ jumps that Wan has a tendency to heavily rely on, it is just plain boring and a complete waste of 100 minutes of anyone’s life. The Babadook is a recent (and quite rare) example of when the horror genre gets it right, well Annabelle is the complete other end of the spectrum. The only thing positive that can be said about Annabelle is that Annabelle Wallis (I am sure it is just a strange coincidence that her first name happens to be the film’s title) does put in a half decent performance as the film’s main character. However this is completely wasted as every other aspect of how the film is made is appalling; from the flat and clichéd script to the lazy and cheap camera shots to the complete and utter lack of atmosphere or intrigue. There entire plot is basically just randomly shoved together moments. Annabelle is the film industry and horror genre at its most lazy and cynical, and the sooner they stop churning out frustratingly dull nonsense like this, the better. Cynical and lazy filmmaking of the highest and most frustrating order; Annabelle is a soulless and dull waste of time and the worst thing is; the makers of it do not even care!