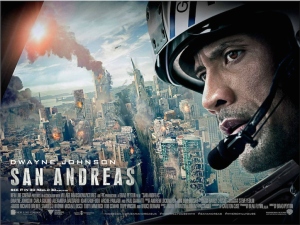 When the San Andreas Fault triggers an earthquake more powerful than since records began, a search and rescue pilot (Johnson) must find his way through the total devastation to rescue his daughter who is trapped in San Francisco.

The added context of expectation does seem to be of increasing importance when going to see films with budgets in excess of $100 million these days at your local multiplex, and that is certainly very much prevalent in San Andreas; it is a big budget disaster movie starring Dwayne Johnson! Basically, just by writing that I should probably give up any attempt of writing some kind of review as that is pretty much all anyone needs to know.

Some may claim that it is not unreasonable to expect budget and brains, but with the disaster movie genre and the current era of Emmerich that just simply does not happen as the producers want to play it safe so they can get their money back. Earthquakes (and indeed all natural disasters) bring about utter devastation that is of course beyond all words and so if we are paying money to see a film about such a thing then surely it can only be seen as pure entertainment, and that is first and foremost what San Andreas is, and anyone expecting anything more is perhaps either naive or deluded. Though admittedly there is dumb and really fun, while San Andreas is really dumb and only just about fun.

For those of you thinking “at least this one isn’t directed by Roland Emmerich”; I am afraid that writer Carlton Cuse certainly has his big book of Emmerich blockbuster clichés to hand and follows it very diligently indeed, with perhaps only missing out the bit where the dog survives (don’t worry; that does not mean a dog dies!). So of course we have devastation (and naturally death) on a humongous scale, but we are only supposed to care about a few central characters who have their own personal predictable journeys as well as being seemingly indestructible unless the narrative requires them to have an injury, bad characters getting what they ‘deserve’ and another character to give us a patronising geography lesson.

With a film of this kind we are naturally supposed to marvel at the expensive set pieces, but we need a small group of central characters to route for or want to meet a horrible demise. Of course the classic disaster movies of old have at the heart of the narrative an underlying theme which usually contains some cautionary morality tale, well San Andreas has none of that and is a completely shallow and vacuous film, but it just about manages to entertain. Though this is basically down to Dwayne Johnson’s natural charisma, the humongous set pieces and the fact that San Andreas is often quite funny viewing (laughs obviously very much at!).

There are attempts (very lose definition of that word!) to give Dwayne Johnson’s protagonist a backstory with emotional depth and baggage, but this, like everything else in the script is as flat as the buildings the film’s tectonic antagonist destroys. We frequently get characters unnecessarily describing exactly what we can see on the screen, and quite an effective drinking game can be produced from every time a character says “Oh my God!” or “Oh Shit!”.

A better script could have certainly given the viewer far more emotional involvement, but what we have is probably suited to Dwayne Johnson’s limited range. However fair play must go to him as he has found his niche and his natural charisma is probably perfect for the completely shallow nature of San Andreas, it also makes the outrageous resourcefulness of his character as he drives boats, flies planes and parachutes his way to San Francisco to save his daughter add to hilarity – and all Dennis Quaid did for Jake Gyllanhaal was go for a very long walk in the snow! However not even Dwayne Johnson can pull of a joke combining sex and baseball (possibly a blockbuster first), that is particularly cringe worthy!

The rest of the performances fit the caricature clichés adequately, though Kylie Minogue (very briefly) turning up is slightly unexpected, and as I said earlier, it is very obvious exactly what is going to happen to them, and indeed how. However, it is often said that is not necessarily about the destination, but about the journey; well the narrative journey of San Andreas may be never in doubt, but at least the journey (with the right expectations) is quite fun.

Utter, utter vacuous nonsense, but of the most entertaining order; One could write a whole thesis criticising San Andreas, or they could switch their brain off and enjoy the humongous set pieces and Dwayne Johnson’s natural screen charisma in what may well be one of the funniest (and certainly loudest) two hours of 2015.