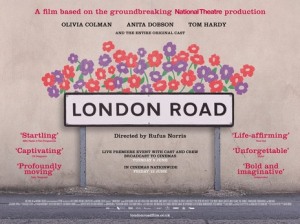 In 2006 the quiet Suffolk town of Ipswich was the centre of national news after the brutal murder of five local prostitutes over the Christmas period. After the individual charged with the murder is identified as a resident of London road, the local residents join forces to restore some pride to their neighbourhood.

I for one remember hearing about the brutal murder of five prostitutes in Ipswich over the Christmas period on the national news in 2006. I was certainly horrified, but never expected there would ever be a musical made about it. I will happily confess to never even knowing about the stage production, but when stage musicals do well they often make the transition to the big screen. Of course the unique nature of this musical is that it uses the exact words from interviews and news reports taken at the time and these then dictate the meter, pitch and rhythm of the music, which does help to explain why there is a play on this moment of recent history.

Having never seen the play, I of course cannot comment on what has been changed (if anything), but thankfully not only does the unique rawness of the play seem to translate very well in this transition onto the big screen, crucially it also does feel genuinely cinematic. The narrative itself does not depict the murders, the victims or the perpetrator; its sole focus is the residents of London Road and it is a very involving story of a community coming together in the wake of great tragedy.

Of course the fact this is very recent history means the film (and indeed the play that preceded it) certainly ventures into a very sensitive subject matter, but it thankfully never cashes in on this brutal tragedy and has it its core some interesting themes about community and how human nature can produce extreme paranoia and pandemonium. As the residents of London Road come together the story never loses sight of its subject matter and deals with it in a respectful way, even clearly acknowledging the fact that it took brutal tragedy to produce a long awaited community spirit in the neighbourhood.

As a musical London Road indeed would be expected to feature big choruses that are accustomed with most musicals, and though the soundtrack will admittedly not make great home listening on its own, the unique nature of the lyrics (basically the definition of naturalistic dialogue!) are utilised and verbally performed with maximum effect to produce some stunningly cinematic moments of great crescendo.

Rufus Norris and his team also create some visually stunning sequences to make sure London Road feels at home on the big screen, with great swooping camerawork or close up shots of the characters which only enhance the themes the lyrics explore. Cinematographer Danny Cohen also does a great job with a pallet that changes to reflect the mood of the narrative and its characters, but does so in a way that is subtle enough to be effective, but not too overbearing.

Though only 91 minutes, London Road does at times feel a lot longer, and though the narrative has some good messages, it is disjointed and episodic with a distinct lack of coherent flow, and there are moments that admittedly feel like irrelevant filler. Though the unique nature of its music takes some getting used to, otherwise London Road is a genuinely enjoyable, involving, often funny and well-made musical with some memorable characters brought to life by some great performances by the original stage cast. Even though the addition of Tom Hardy (who appears in two scenes) seems just as simply a cynical way to get bums on seats.

A triumphant transition from the stage to the big screen; London Road retains its unique lyrical rawness from its stage production and director Rufus Norris makes sure the film feels visually cinematic to create a musical that is both involving, funny and aesthetically pleasing.