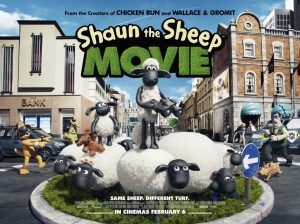 Fed up of the same daily routine on the farm, Shaun decides to take the day off and have some fun instead. However when their plan to keep The Farmer asleep all day goes extremely wrong, Shaun and his fellow members of the flock are forced to travel to the big city to get their farmer back and restore normality.

The memory of some great children’s TV programmes have been absolutely ruined in the last ten years or so by big screen versions that are abysmal and a real insult to the original TV series. Well Ardman proved to be a safe pair of hands with Wallace and Gromit and the Curse of Were-Rabbit, Chicken Run, The Pirates in an Adventure with Scientists and Flushed Away. Well, thankfully Shaun the Sheep’s transition to the big screen is just as seamless with a film that is quite simply a highly entertaining and often hilarious 85 minutes which can be enjoyed by all ages.

Of course it should not be underestimated how much of an achievement this is as the individual episodes are no more than 10 minutes and contain hardly any dialogue, and so keeping this formula going for 85 minutes was most certainly always going to be a challenge. However the fast paced plot, incredible attention to detail, great set pieces and constant visual gags make sure that Shaun the Sheep Movie is just such good fun and proves that a feature length film can be highly enjoyable and engrossing without dialogue, but by just having great storytelling craft and sublime animation. There is also a mixture of songs used very effectively to reflect the mood of the narrative at the particular time they are used.

Taking the characters form the usual surrounding of the farm was always a risk, but of course essential to produce a proper coherent feature length plot. There was also always going to be the necessity to have some kind of antagonist, and this can be found in the form of a nasty animal controller. However screenwriters and directors Mark Burton and Richard Starzak and their team of animators handle this all with aplomb and make sure that at the heart of the narrative is exactly what makes the TV series and its characters so endearing and hilarious.

There is the occasional reference or joke thrown in that only adults will understand too for good measure, but the laughs never really stop and Shaun the Sheep Movie is certainly a lot funnier than most of the mainstream ‘comedies’ that come out these days. The fast pace, inventive visuals and hilarious gags are kept to a consistently high standard all the way to the film’s satisfying ending and there is certainly a lot that the other studios who make children’s film can learn from Ardman.