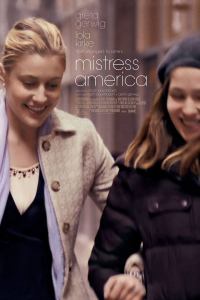 College Freshman Tracy (Kirke) soon finds college life in New York extremely lonely and unfulfilling, and so at the advice of her mother contacts her soon to be sister-in-law Brooke (Gerwig). The two spark an immediate friendship, with Tracy immediately becoming involved in Brooke’s turbulent life and her bizarre schemes and ideas.

It is certainly hard to sum up the plot for Noah Baumbach’s latest collaboration with Greta Gerwig, and that is because it doesn’t really have one. As Mistress America is very much a character driven narrative that is not necessarily a problem, as indeed the slapdash narrative mirrors the lives of its characters, but unfortunately these are characters it is very hard to like and, despite the character driven narrative, what happens actually often feels extremely self-aware, staged and unnatural.

There is no denying that at keeping the running time at only 84 minutes Baumbach seems very well aware of how potentially irritating these characters can be if the audience were forced to keep their company any longer. For this entire time Mistress America is certainly very entertaining, never boring and often hilarious. In fact, if I hadn’t had to write a review of this film I would perhaps have more fond memories of it than I do now, as once the film is analysed on an even moderately deep level it becomes immediately prevalent there is indeed hardly anything beneath its slightly smug and self-aware surface to offer the viewer.

This is a real shame as there is so much potential in Mistress America and its tragic characters (though their tragedies are of course very much the non-fatal sense of course); Boumbach seems to be going very much for the Woody Allen approach, but from an interesting start all we get is extremely staged scenes and self-aware dialogue that just lacks any of the bittersweet examination, emotional involvement or ultimate redemption/ catharsis that Mistress America should have. What ultimately makes this film so disappointing is just how good it should have been!

One of the film’s saving graces is the cast; Greta Gerwig is always a very watchable screen presence, and her energetic performance makes Brooke more likeable than the script (co-written by Gerwig herself) should allow her to be. Lola Kirke is also excellent as Tracy, with a real penchant for comic timing and delivery, and indeed all the rest of the cast of bizarre characters that come and go put in very good and often hilarious performances.

There is no denying that Mistress America is often very funny, with some great individual comic lines made only funnier by the actor’s delivery, and it is never anything less than very entertaining while it is on the screen and its suitably short running time does simply fly by. However its total lack of actual substance and lack of characters with actual depth renders it highly forgettable. It is however best to forget about it, because thinking about it afterwards makes it even more obvious that Mistress America is ultimately a smug film about smug characters made by smug people, which is of course not a very good thing. Baumbach and Gerwig can do much better than this.

Despite some great performances and genuinely hilarious moments, Mistress America is ultimately too shallow and self-aware beneath its surface to last long in the memory.

An extremely passionate and (semi) opened minded film reviewer, with a hint of snobbish.
View all posts by MoodyB →
This entry was posted in All Film Reviews and tagged comedy, entertainment, film, film review, Greta Gerwig, movie review, Noah Baumbach. Bookmark the permalink.