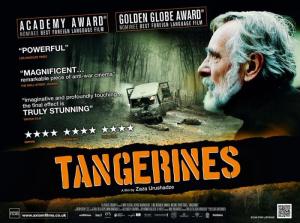 During the 1992 – 1993 war in Abkhazia between Georgia and the Abkhazians many Estonians fled back to their home country, however native Estonians Ivo (Ulfsak) and Margus (Nüganen) are the only two that remain in their village, staying there to harvest tangerines. However, after a shootout in their village, Ivo takes in and cares for two seriously wounded fighters who are on opposing sides, but as they start to recover he is forced to stop the two men from killing one another.

Sometimes the simplest of messages can be the most effective and memorable, and at the heart of Tangerines is a very simple message, but this exceptional film delivers it with the utmost effectiveness. This message and the very anti-war themes of the film are examined with effortless and subtle simplicity, and during its suitably brief running time of 86 minutes it never over emphasises its point.

Many of the narrative developments are admittedly contrived, but this is very much forgivable as it is only in tune with the films economical approach, it does have at its core a very simple idea but how the this is depicted by the narrative makes for a deeply involving, engaging and unforgettable viewing experience. Tangerines is very much a character driven story, and its intimate examination of some extremely broad and most certainly genuinely pertinent themes is what makes it such a compelling and unforgettable drama.

To describe the film’s examination of its central themes as simplistic does admittedly sound derogatory, but it is because of its economical narrative simplicity and subtlety that Tangerines is so effective at examining its narrative ideologies.

These are of course ideologies most of us would completely agree with from the offset anyway, and Urushadze knows he is predominantly preaching to the converted, but Tangerines is also very much a deeply engaging character driven drama at its core. Though the arcs of some of its characters are a tad predictable and feature a fair share of contrivance, how these are presented is in a way of absolute integrity and involving narrative storytelling, and as the film progresses it is impossible not to deeply care for all of its four main characters.

At the centre of the film is a perfectly understated but commanding performance from Lembit Ulfsak as Ivo; despite being an old man who is physically weak and therefore not a physical match for his two ‘guests’, Ulfsak brings an abundance of commanding screen presence to make sure that Ivo convinces as a compassionate but also deeply fearless character. Likewise Girogi Nakashidze and Misha Meshkhi are exceptional as the two injured soldiers that have been fighting on opposing sides, both emerging as engaging and deeply likeable characters. It is down to how a good a film Tangerines is that though there is always an underlying sense of tension when these political enemies share scenes, we do genuinely want them to get on and get over their differences.

Though the single setting and dialogue heavy approach means Tangerines could easily be a play, the film does feel genuinely cinematic. Niaz Diasamidze’s wonderfully melancholic score enhances the mood without ever being intrusive or gimmicky, and Rein Kotov’s suitably bleak cinematography enhances the feeling of isolation of the film’s setting.

From start to finish Urushadze skilfully maintains a level of consistency in that Tangerines never patronises the audience by over emphasising its ideas and also avoids the unfolding drama ever being overly sentimental. Though a subplot which essentially gives the film its name feels slightly unnecessary, it does add to the context of the setting of a war few us will know about, but ultimately this film and a vast majority of its dialogue could be set during in any war in human history. This is masterful film making that proves that even the most simple and universal of ideas, when explored in the way it is in Tangerines, can provide deeply emotional, engaging and unforgettable viewing.

Undoubtedly one of the year’s best films; Tangerines has during its suitably brief running time a simply story, a simple premise and simple, universal ideologies, but these are presented with extreme subtlety and the utmost effectiveness to make for a deeply engaging, emotionally involving and unforgettable human drama.

An extremely passionate and (semi) opened minded film reviewer, with a hint of snobbish.
View all posts by MoodyB →
This entry was posted in All Film Reviews, The Best of 2015, World Cinema and tagged drama, entertainment, film, film review, foreign films, movie review, world cinema. Bookmark the permalink.