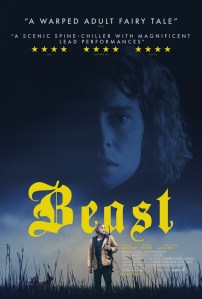 In a small island community on the isle of Jersey, a troubled young woman called Moll (Buckley) falls for a mysterious outsider called Pascal (Flynn), and this empowers her to finally escape her oppressive family. However, when Pascal is the main suspect in a police investigation into the recent murders of four young local girls, Moll goes out of her way to defend him, leading to revelations of dark personal secrets that they both have been keeping.

It is a strange coincidence that the two films I see that at the cinema over one weekend are both set on the Channel Islands, yet not only are both films much further apart than the 27 miles that separates the two respective islands in terms of their stories and style, but they also use the beautiful scenery of these islands in very different ways. Michael Pearce’s stunning feature length debut is a dark, atmospheric, deeply intriguing and highly intelligent thriller with an expertly executed slow burn plot.

One of the very first words Moll says to Pascal is “you’ve got blood on your hands”, which is literally true as he does have some from poaching rabbits, but this also plants a seed in the mind of the viewer as we know that there are more to the film’s main characters (both Moll and Pascal) than we first know of. Writer / director Pearce skilfully makes sure that the narrative keeps its cards very close to its chest, with the audience being given only minimal information to work on as we try figure out some of the dark secrets within this small, isolated community.

Pearce uses all of the cinematic tools at his disposal to create an intoxicating atmosphere of foreboding and dread, and he skilfully makes what would normally be picturesque locations seem isolated and desolate. The film’s sound design is also stunning; the crashing of the waves, the howl of the wind and the creaking of the trees being frequently used to enhance both the atmosphere, and the film’s main themes.

The dialogue is minimal, and the plot goes along at an intentionally measured pace, as Pearce skilfully keeps things subtle to avoid Beast ever feeling like style over substance, and little visual cues explore the lives of Moll and Pascal as we try desperately to paint a picture and figure these multifaceted characters out, especially Moll’s complex relationship with the members of her family. Moll inevitably does have some dark secrets of her own, but even when we do think we understand her and the reasons why certain characters act in certain ways, Pearce then skilfully continues to peel away ever more layers.

The performances are exceptional; Jessie Buckley gives a stunningly raw and committed performance as Moll, demonstrating in mere facial expressions just how damaged and haunted her character is. While Johnny Flynn has the necessary natural charisma and charm, but also has the expression of a man with some dark secrets.

Beast is part murder mystery thriller, part family drama, part character study; Even up until the film’s exhilarating finale there maintains a level of ambiguity and Beast is not afraid to ask the audience questions, and this is very much the case in the film’s penultimate scene, which is a wonderful exercise in cinematic understatement. This is all leads to an unforgettable and haunting finale that is consistent with the film’s overall tone and pitch, and one that will stay with the audience for a very long time.

An exceptional feature length debut from Andrew Pierce; Beast is a visually stunning and deeply atmospheric thriller, with the exploration of its themes all executed with skilful, measured and understated precision by its director.

An extremely passionate and (semi) opened minded film reviewer, with a hint of snobbish.
View all posts by MoodyB →
This entry was posted in All Film Reviews, British Films, The Best of 2018 and tagged british cinema, british film, entertainment, film, film review. Bookmark the permalink.