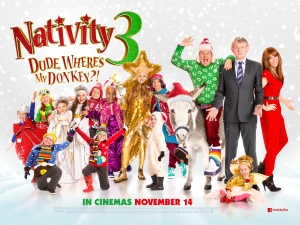 Genre: Torture on all the senses

With an impending inspection, the new head teacher at St. Bernadette’s (Celia Imrie) employs ‘super teacher’ Mr Shepherd (Clunes) to up the standards. However, after receiving a kick in the head from the school Donkey (!) he loses his memory, including the fact he is marrying Sophie (Tate) in New York for Christmas. Now Mr. Poppy (Wootton) and the pupils must remind Mr Shepherd who he is and also win a Christmas flash mob competition to be able to get him to New York. Or something like that anyway.

Christmas is of course a time of year filled with cynical clichés, and so in turn we of course accept that all Christmas films have a fair amount of this (even the very best), but for the vast majority that only ever get seen on Channel Five on a Sunday afternoon there are some that enjoy great commercial success. Nativity 3 enjoyed financial success at the UK box office last Christmas and I am sure will sell very well on DVD this Christmas, all this despite a universal slating. Critics can of course be a little sniffy to commercial crowd pleasers, and so I thought that I would watch Nativity 3 for myself as surely it cannot be as bad as everyone said. The first one was certainly generic and clichéd, but good fun and had an infectious sense of warmth and charm, while the second was a shameless cash-in that was pretty horrific, but the this third instalment makes Jingle All the Way look like Citizen Kane; watching Nativity 3 is an experience so indescribably bad it could easily put one off both Christmas and watching films for all eternity.

I for one am more than happy to forgive a festive film for being a little clichéd or predictable, but Nativity 3 really is something else! I have only written reviews for half of the films I have seen this year, and though in some ways it in no way deserves any more of my time, I feel I have to write a review of Nativity 3 not only to warn those that are yet to subject themselves to this cinematic torture, but to cleanse my soul and just get the whole hideous experience of watching it out of my system. There are no words to describe the borderline evil level of cynicism and laziness behind it. I implore all of those yet to see this cinematic detritus to avoid doing so, no matter what their age!

Many indeed would argue that Nativity 3 is a film for children and not cynical and pretentious film studies graduates like myself, but the fact is that it insults the intelligence of children, and indeed all sentient beings. There is absolutely no justification for the existence of this deeply cynical piece of cinematic hideousness, it is made with only the worst of intentions and every second of its 110 minutes (!) are an excruciatingly painful experience. The running time alone proves just how much ill-discipline and also lack of respect for all good, honest film fans this, err, thing was made with (even using the word film seems like an insult to all other films ever made!).

The direction is televisual, predominantly improvised script abysmal, actual plot seems just as improvised, songs appalling and the performances embarrassing; the cast really should know better than to even go near something like this. Taking over from Martin Freeman and David Tennant, Martin Clunes may well have been paid more for being in Nativity 3 than most honest, hardworking people get paid in a year, but he should be deeply ashamed. He does indeed look like he is, especially at the point when he has to sing that takes cringe inducing viewing to a new level, but this is an addition to his CV that he should be forever ashamed off. While the character of Mr. Poppy is truly annoying, but also equally terrifying; the ‘Poppy promise’ is particularly unnerving!

Then of course there is the hideous plot holes and disregard for any realism; I appreciate that there has to be a suspension of belief, but it seems all the young Primary School age children in the film do not have parents that care if they are not at home all night or just randomly fly off to New York. They also at various points commit acts of truancy and criminal damage, but that is apparently okay as this is a Christmas film! The film does not even attempt to address huge plot holes or worry about what are quite frankly highly illegal and morally repugnant actions of its cast, but that is alright, it is Christmas after all! This film should also be in trouble for cruelty to animals; poor Archie the donkey is not only the one likeable character in the film, but also deserves a far better script than his poo being the primary basis of the narrative’s ‘comedy’ moments.

There is no word in the English language to describe either how bad Nativity 3 is, or indeed to even remotely understand its box office success. What is truly terrifying is that it makes Nativity 4 a real possibility, and cancelling Christmas forever may be a better option than even the idea of yet another film in this vile franchise. Just watching this film is enough to make someone wish that Christmas never existed!

A deeply traumatising insult to film fans and indeed Christmas itself; Nativity 3: Dude, Where’s My Donkey is extremely cynical and lazy filmmaking of the very highest order that should be avoided at all costs by anyone who wishes to maintain any positive opinions of the yuletide season.