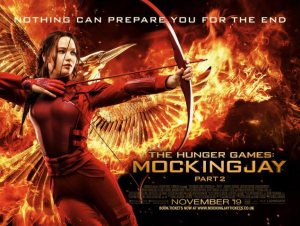 As the war for Panem escalates and whole districts are destroyed, Katniss Everdeen (Lawrence), the reluctant face of the rebellion, is faced with some serious moral decisions that could decide the fate of millions.

I have certainly made no secret of the fact I cannot comprehend the universal acclaim and staggering success of The Hunger Games franchise. I have never read the books, and they may well be brilliant, but for me every single film in the franchise, though certainly watchable enough, is forgettable, contrived and anticlimactic. What is so disappointing is that there is always some initial interesting concepts and ideas, and these have admittedly got more interesting as the franchise has gone along, but the writers have genuinely failed to utilise these and saturated them with contrived action sequences and dull love triangles. Well, though at least it is consistent in some way, Mockingjay Part 2 is just as dull and uninvolving as previous chapters, meaning the franchise concludes on a real damp squib.

Mockingjay Part 1 in particular had some great initial ideas such as the idea that one of the most important weapons in war can be the utilisation of propaganda, and this once again plays a key role in Part 2, but is never dealt with the depth or level of intelligence that it deserves. Part of what could have made Mockingjay Part 2 good is the fact certain elements of its plot are extremely topical; not only the aforementioned idea of propaganda being one of the most powerful weapons during a war, but also questioning what happens once an oppressive regime and common enemy has been toppled; will this just cause more chaos? Will those that takeover be just as bad or even worse?

Well, Peter Craig and Danny Strong’s screenplay just fails to deal with these in a particularly intelligent or engaging way; these themes are both conveniently forgotten about or patronisingly rammed down the viewer’s throats depending on what the story wants to focus on. This, compiled with too many characters fighting for personally defining moments and a clumsily episodic narrative produces a narrative which is often difficult to engage with, and the apparent sense of danger not depicted with anywhere near as much unforgiving ferocity as it should be.

I appreciate that this film has to be a 12a for purely cynical profiteering reasons and there has to be action and romance to go with the substance, but films can be commercial and intelligent, and while The Hunger Games is most definitely very commercial, this leads to all the ideas and themes that could make it interesting, engaging and thought-provoking having to be compromised. The result is a film that is not only uninvolving and uninspiring, but also depressingly predictable.

It is this level of predictability that for me makes this the most uninvolving of all the films in the franchise, every plot development is clearly signposted, while the continual contrivances that have led to Katniss constantly being miraculously saved in the previous films continue, which does heavily dilute any real sense of genuine peril. The plot itself feels like a video game, with the occasional boss level throwing in random obstacles to overcome.

I am not sure if it has any correlation with her becoming increasingly famous as the franchise has gone on and her not feeling she has to make any effort anymore, but Jennifer Lawrence’s performances have got progressively worse, and she gives a truly flat and one-dimensional performance of what should be a deeply conflicted and relatable character.

The fact that there has been three previous films means the abundance of characters have had an element of backstory, but so many are dealt with extreme causality by the narrative, which is unfair as some of the performances are solid. Naturally the more experienced cast such as Julianne Moore, Philip Seymour Hoffman (in his last ever performance), Woody Harrelson and Elizabeth Banks help to make their characters more engaging than the actual script deserves them to be. Meanwhile Donald Sutherland thoroughly enjoys himself as President Snow, but in the entire four films his character has not been as deeply developed as it should be, but his performance means that he is great to watch (and almost worth routing for – that fact I say that is reflection on the poor writing, not me as a person!).

Of course the other two main characters are Katniss’ two little lapdogs Peeta and Gale. While Liam Hemsworth’s Gale is still basically playing the role of rent-a-hunk and a character with no real depth (Hemsworth is solid though), the events at the end of Mockingjay Part 1 have turned Josh Hutcherson from annoying drip into a genuinely interesting character. Peeta is by far the most intriguing character of the film, mainly down to the slight element of predictability that his character now gives to the narrative (I do mean slight though!), and Hutcherson depicts Peeta’s deep internal conflicts with superb intensity. Sadly Peeta’s internal conflicts are, like anything else that could actually be interesting if dealt with genuine intelligence, is at the unforgiving mercy of the deeply predictable narrative’s mercy.

Aesthetically, Mockingjay Part 2 is undoubtedly competent; Francis Lawrence’s direction is solid, but the fact is the script he has to work with would dilute the tension from even the very best action sequences. The main star of the film is composer James Newton Howard; his wonderfully brooding score tries to add the tension that the script fails to do, and while it undoubtedly enhances the involvement of the film, the score is actually more effective and emotionally involving when listened to in isolation. Though Mockingjay Part 2 is certainly watchable, as soon as the credits started rolling my only thought was “Thank God that is all done with now!”

A truly anticlimactic finale to what has proved to be a forgettable franchise; The Hunger Games: Mockingjay Part 2 is filled with even more contrivances, forgettable characters and predictability than its predecessors.