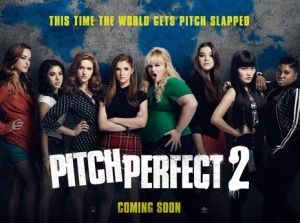 After a performance goes very wrong in front of the President, The Barden Bellas are disqualified from competing in any competitions. However, due to a technicality they are able to perform at the world acapella championships, and so must first put aside existing internal conflicts to defy the odds and win the world championship, and in doing so their only chance at being able to compete again.

It is understandable that when a film makes a huge profit that a sequel is then given the greenlight no matter how much it was ever intend to exit initially, after all films are products that are made to ultimately make money for their producers. Well, Pitch Perfect was somewhat of a surprise hit, but it did make a lot of money, and on the back of this the greedy bosses at Universal seem to have essentially demanded a sequel. Well, while Pitch Perfect was incredibly cheesy, it did have a certain infectious charm about it, but unfortunately Pitch Perfect 2 is just a film made by accountants that only exists for the most cynical of reasons. Lacking any of its predecessor’s natural charm, it is a turgid mess of a film made with the utmost cynicism, laziness and complacency by all involved.

The plot itself is pretty much non-existent, and though this in isolation may not be a problem if the film were fun, the whole disjointed and episodic narrative is put together by screenwriter Kay Cannon and director Elizabeth Banks with embarrassing incompetence that makes the whole experience rather alienating. I appreciate that this is never going to be a film that is first and foremost about plot and well defined characters, but the narrative is presented with such grating ineptitude, with random subplots all over the place and no care for even trying to be good that it makes the whole 115 minutes painful viewing.

To say Pitch Perfect 2 is predictable will not surprise anyone, and predictability is not a problem if the film is fun and the characters engaging. This is admittedly where Pitch Perfect succeeded; as that film didn’t even contemplate producing any narrative surprises but it was good, cheesy fun, but Pitch Perfect 2 just has nothing positive to offer.

The actors also look like they cannot be bothered either, and that they were all contractually obliged to be there. Anna Kendrick in particular really looks like she doesn’t want to be there, and as the main character that does not bode well for narrative engagement. Meanwhile Rebel Wilson is more annoying than ever and newcomer to the franchise Hailee Steinfeld struggles with the poor character development she is given.

Even the song routines, which are of course the main showpiece of the film, are not only thrown into the narrative very clumsily, but are not done with any visual panache whatsoever. The comedy too ranges from embarrassingly crude to just plain lazy, the shocking puns using the word ‘pitch’ on the marketing are just the start! The only saving grace is John Michael Higgins as the cynical commentator, but though he does his very best, the material he is given this time around is not up to the standard he deserves. Pitch Perfect 2 is a perfect example of the deep cynicism that exists in mainstream cinema, as all involved knew this would make money and so didn’t even feel the need to attempt to make any effort. A real insult to the intelligence of all good, honest film fans everywhere.

Flat script, flat visuals and flat performances all put together with total and utter narrative incompetence; the surprise success of Pitch Perfect has led to a sequel with none its predecessor’s unique charm and sense of fun. Pitch Perfect 2 is a completely off-key sequel that is deeply cynical accountant-influenced film making of the nastiest kind.