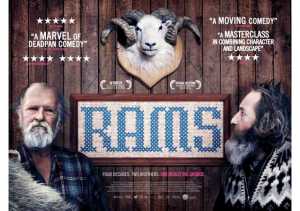 In a remote valley in Iceland, two brothers, Gummi (Sigurjónsson) and Kiddi (Júlíusson) live on sheep farms next door to one another, but have not spoken to one another for 40 years. However an outbreak of scrapie in the valley means they may finally have to set aside their differences to save their livelihood.

Scandinavian humour is perhaps an acquired taste to those of us from outside that region, but for those of us happy to embrace jet black humour their films offer many pleasures. Rams is such a film in that it has a seemingly simplistic plot at its core, but how this is presented makes for a deeply engaging film. It is a film very much grounded in reality in terms of its story and its characters, but how this is presented is with a wonderful deadpan humour and purposefully measured pace that makes it all the more emotionally involving.
How dramatic a narrative can be is solely about context, and the narrative developments of Rams produce a wholly tectonic change to the lives of the two brothers and their entire way of life. In isolation very little happens in the film’s narrative, but how everything is presented is intentionally measured, but is never anything less than engaging as both characters, despite their faults and flaws, are likeable.

It is the fact that both Gummi and Kiddi are so likeable that we cannot help but be incredibly eager for them to set aside the long term differences and finally work together again to get through the tragedy they have both experienced. As the film develops writer/ director Grímur Hákonarson stays very much in control of his film and skilfully presents a story at an intentionally measured pace that is as slow and gentle as the life the characters lead, but it also, and crucially, never loses touch with reality. This produces many hilarious scenes, but also engaging ones as it is impossible not to care for the two characters and it produces a finale that is deeply engrossing, moving and unforgettable. It is a finale that same may find frustrating in its approach, but is undoubtedly an unforgettable, moving, appropriate and purposeful ending.

As the two brothers Sigurður Sigurjónsson and Theodor Júlíusson are note-perfect; producing suitably understated performances that depict two deeply proud men who live a simple, dignified existence and deeply care for their sheep. In cinema simplicity can be deeply effective, and Rams is a perfect example of this at it most effective.

Visually Rams is stunning to look at and wonderfully cinematic; Hákonarson’s camera is often suitably static, with long takes and gentle panning allowing the breathtakingly scenery to be a character all of its own. Rams is a film that is presented and made with such effective simplicity that there is little to say about that can do it justice, it is just a film that should be seen by all who appreciate great storytelling and filmmaking.

Yet another truly unique and unforgettable cinematic gem to come from Scandinavia; beautifully shot and engaging from start to finish, Rams is a perfect example of how less can indeed be much, much more in films.