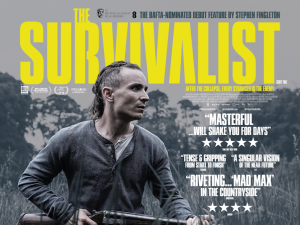 Society has collapsed and the global population minimal, but nature has thrived and in the wilderness one man (McCann) lives alone, just about surviving on nature. However after the arrival of two women, aware of the benefits they can all bring to one another, the three of them form an uneasy alliance which could put all of their lives in danger.

Sometimes a film comes out of nowhere that defies its low budget to not only be a reminder of why films deserve to be seen on the big screen but that having a low budget cannot get in the way of a filmmaker bringing his ideas and vision to the screen. Writer/ director Stephen Fingleton’s film is an example of this; it was made with a minimal budget and stars an unknown cast, yet defies many of the stereotypes associated with low budget films to not only be a deeply cinematic experience, but also a profoundly unforgettable one.

Stephen Fingleton was nominated for a BAFTA for this film (his feature length debut) and deservedly so, as it most definitely cements him as a filmmaker to watch as with The Survivalist he utilises every cinematic element available to him. For its entire deeply intense 104 minutes The Survivalist grabs the attention of viewer tightly by the scruff of the neck and refuses to let go.

The dialogue in Fingleton’s script is minimal, but through the body language and facial expositions of the characters and the film’s visual aids the viewer is given more information to process than any exposition could provide. The fact we have to interpret it instead of simply having it patronisingly explained to us makes the viewing experience all the more engaging and rewarding.

In terms of actual plot there is very little and what happens is certainly less than original, but Fingleton skilfully uses this initially generic premise to make a deeply effective exercise in cinematic tension and intrigue, as well as an effective examination of the human condition. The fact this is all done through visuals and the great performances shows the work of a true auteur that is very much in control of his film and will not let obvious budget constraints compromise his vision.

It will be almost impossible for most to see The Survivalist at the cinema, which is a shame as that is where it deserves to be seen. Unlike most films set in a future where society has collapsed, The Survivalist is not set in a baron wasteland, but nature is in fact doing very well. The sound design of both the interior and external scenes is incredible, only enhancing the cinematic nature of the film, but also the constant intense close ups only enhance to emphasise the isolation, claustrophobia and deep paranoia each character experiences.

The performances from the three main characters are also exceptional. As the narrative progresses, we learn more about our protagonist’s backstory (we are never told his actual name), but we know from the off that all three characters have experienced a lot to get to the point of which the film takes place, and some of it is likely to have been highly unpleasant and deeply scarring on an emotional level. Each character is relatable in that they simply live to survive, and survival is the primary motivation behind their actions, and as all three attempt to survive it makes for gripping viewing as we are never truly sure how one will react to another’s action. All three actors portray their characters deep emotional scaring and internal conflicts with exceptional aplomb, only serving to enhance the film’s engagement.

As it enters its final third a few plot developments do venture into generic territory and the ending poses more questions than perhaps are necessary, but otherwise The Survivalist is an incredibly impressive feature length debut and already a contender for one of the best films of 2016.

An expertly executed exercise in cinematic tension; despite its very modest budget The Survivalist is an incredibly cinematic film that deserves to be seen on the big screen and grabs the attention of the viewer tightly and refuses to ever let go.

An extremely passionate and (semi) opened minded film reviewer, with a hint of snobbish.
View all posts by MoodyB →
This entry was posted in All Film Reviews, BAFTAs 2016, British Films, The Best of 2016 and tagged british cinema, british film, drama, entertainment, film, film review, movie review. Bookmark the permalink.