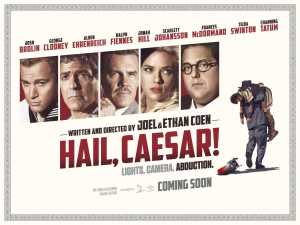 Eddie Mannix (Brolin) is a fixer for successful studio Capital Pictures in the 1950s, and his job it is to specifically clean and solve problems caused by the studios big stars such as wayward actors and uptight directors. However, after one the studio’s big stars, Baird Whitlock (Clooney) is mysteriously kidnapped it leads to unfolding events that prove to be Eddie’s biggest test yet.

To be light on actual plot does not necessarily prevent a film from being enjoyable. Indeed, I am sure there are many films we all have a deep affection for, but when asked to simply describe the plot for those that haven’t seen it we actually struggle with this and think to ourselves that we are not doing the film justice in selling it to those that haven’t seen it, but the fact is that plot-wise, the film is actually quite light.

Well the latest from the Coen Brothers is certainly rather light when it comes to actual plot, and is tonally at the more screwball and wackier end of their particularly broad and unique individual cinematic spectrum. In terms of the initial concept, and then that combined with the cast list, Hail Caesar sounds like it cannot fail. Well, there is certainly no denying that the brothers Coen make their latest with a real twinkle in their eye and it is obvious that there is genuine passion and deep affection for not only the film’s subject matter, but everything to do with the era it is set in. There are so many references within the film to actors, directors and films from the era that the film takes place that it is impossible to deny that this is the Coens showing their love for the era. There are certainly many moments that mock aspects of it, but it is my opinion that this is only done with light hearted affection and never any kind of cynical angle.

From start to finish Hail Caesar has an abundance of characters, and many represent the sort of characters the film industry still includes today that are easy to mock, but this film mocks them in a playful, affectionate way. There are many, many hilarious scenes and individual lines of dialogue throughout the film, and it is highly likely that repeated viewings may well yield new laughs and references.

However, for all its genuine affection and enthusiasm there is no getting away from the fact that Hail Caesar is an ill-disciplined mess that is often hard it get into. The Coens have earnt the right to make a film for themselves, after the exceptional No Country for Old Men they let their hair down with the silly, but enjoyable and forgettable nonsense that was Burn after Reading. Well, in the case of Hail Caesar¸ while watching it is hard to escape the fact that if, as the viewer, if we do not get the abundance of references, then we feel like an unwelcomed guest at the Coen Brothers own private Hollywood tribute party.

Though the main narrative arc of Eddie Mannix is supposed to keep all the endless subplots and set pieces tied together, it only just about manages to do this as though there is no denying that there are many hilarious moments, there are also pointless and boring moments and the ill-discipline often threatens to turn into alienating self-indulgence.

Though every single performance from the list of famous faces is excellent and note-perfect (the standout being Alden Ehreneich), and the film is also visually stunning; from Roger Deakin’s superb cinematography to the set design, to the unique sequences of the characters playing their own fictional character within the fictional narrative (including several dance routines). However there is no escaping the fact that the feeling of self-indulgence is only emphasised by the Wes Anderson-esque cast list of big names and the fact that many of them only get one or two scenes (Jonah Hill is on the poster but only gets one scene and four lines!). If this film were to be analysed scene-by-scene then there could be many scenes and characters that could be cut completely, I know that possibly goes against the point of this film, but it cannot but help show up its completely slapdash narrative ill-discipline. There is no denying that the Coens latest is made with genuine passion and affection for its subject matter, and as much as the film is great fun to watch and often laugh-out-loud funny, that cannot disguise the fact that Hail Caesar has an episodic narrative of randomly thrown together subplots and set-pieces, and it is nowhere near their best.

Hail Caesar is the Coens showing their quirky, light hearted side. However despite the fact it is a film with many hilarious individual moments and made with a great affection for its subject matter, the air of self-indulgence and ill-discipline is too great to be ignored.