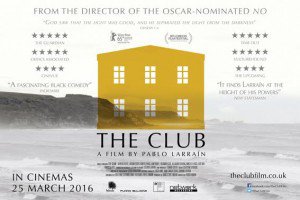 In a small Chilean coastal town live several priests and a nun, all of which are disgraced for crimes ranging from child abuse to baby-snatching. They live a secluded life in a quiet town where the church can forget about them, and though they may never face society’s penalties for their crimes, it also never brings unwanted publicity to the church. However, after a tragic incident involving the most recent addition to the house, they receive a visit from a clerical counsellor intent on both closing the house down and making them face their crimes.

In 2012 Chilean director brought us the exceptional No (review) that was in some ways unique in how it was made, but it proved that films can maintain high levels of both style and substance throughout. Well his latest film is certainly a lot more low key in terms of style, but contains at its centre an abundance of pertinent themes and ideas that often goes to some very dark and bleak places, specifically about the church and its place in society,

After the excellent Spotlight was one of the stars of the awards season, the subjects of that film’s plot may be more in the mind of people, and though I am of no doubt that it was never the intention of the makers of The Club, it does serve as a profound and thought provoking companion piece to Spotlight. By rights the characters of this film should all be in prison, or at least been in prison for their past actions, but because of the role that the catholic church plays in society (in this case Chile) it is nowhere near that simple. For these priests to go to prison or to be simply kicked out of the church would mean yet more bad publicity for the church, but as they are all still priests they are the responsibility of the church and so are kept in a rundown house in a quite coastal town, essentially hidden away and forgotten about.

Of course as a non-religious Westerner from a predominantly secular country, The Club may not perhaps be as pertinent or relevant to me as it is to those from countries where religion plays a more dominant role in society. However thanks to the skill of writer/ director Larraín and co-writers Guillermo Calderón and Daniel Villalobos it is not only an engaging character driven story, but the raw power of its pertinent themes are there for all to understand and engage with. The Club does not even attempt to answer all of the questions that it raises, but it treats the audience with enough respect knowing that we can make our own conclusions, especially as there is no definitive to answers to its complex themes. There are many individual moments and overall ideas from the film that will certainly stay with the viewer long after the credits have finished.

To of course go into too much detail about the questions and themes raised by the narrative would spoil it for others, but as we get to know each character better the film is not afraid to confront us with dark themes, ideas and questions. At times these questions provide uncomfortable, almost confrontational viewing, but it only serves to both enhance our engagement with the film, but also its long lasting and haunting impression.

The performances from the entire cast are exceptional; the subtle but deeply effective understated performances of each actor showcasing through their expressions and body language the fact that they have all lead a life of deep repression and regret. We know that these characters have committed various terrible and criminal acts, but yet all are engaging and memorable, and at times certainly show likeable characteristics. This makes us the viewer conflicted at times, and only serves to emphasise the complexity of the narrative’s themes.

Likewise The Club is extremely cinematic; Larraín’s suitably static camerawork captures both the isolation and claustrophobia that the characters feel. Likewise Sergio Armstrong’s stunning cinematography captures the mood and tone of the narrative perfectly, as though where they live on the coast is peaceful and tranquil, the film’s pallet makes it feel cold and isolated, and deep regret, along with repressed feelings and memories hang in the atmosphere. The use of music is also excellent; for directors ranging from Shane Meadows, Joss Whedon and Terrance Malick, the music of Estonian composer Arvo Pärt is often used to depict misery, but despite the risk of the use of this music feeling contrived or clichéd, it only enhances the film’s deeply unforgettable and haunting mood. The Club is a film that is not afraid to provide confrontation and questions, but thanks to the great performances and its intelligent and engaging depiction of these themes and questions, it emerges as a contender for one of the best films of 2016.

Filmmaking at its most thought provoking and intelligent; through its subtle but deeply effective examination of its themes, ideas and questions, The Club is a unique, culturally important, engaging and haunting drama that will stay with the viewer for a very long time.

An extremely passionate and (semi) opened minded film reviewer, with a hint of snobbish.
View all posts by MoodyB →
This entry was posted in All Film Reviews, The Best of 2016, World Cinema and tagged drama, entertainment, film, film review, foreign films, Pablo Larraín, world cinema. Bookmark the permalink.