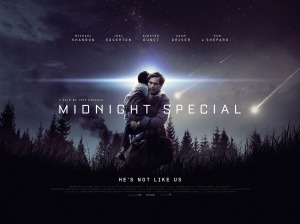 Eight year old Alton Meyer (Jeaden Lieberher) has always had special abilities and powers beyond explanation or comprehension, leading to him being regarded as a saviour by a religious group that he was part of, but also now is wanted by the FBI. Alton’s blood parents (Shannon and Dunst) and their friend Lucas (Edgerton) must travel across the state and elude both these religious extremists and Government authorities that want to capture Alton.

‘Slow-burner’ is certainly an appropriate phrase to describe Jeff Nichols’ previous films, and his latest is yet another purposefully measured piece of cinematic storytelling and is just as emotionally engaging and involving as his previous films. In a nutshell, Midnight Special does actually offer very little originality in what is actually a very simplistic narrative and is undoubtedly a genre piece that appears to pay particular homage to 80s science fiction films (Spielberg in particular).

However, the narrative in isolation is not necessarily what makes a good or bad film, and Midnight Special is once again Jeff Nichols skilfully proving that less can indeed be more if all the cinematic elements that can make a film a rich, engaging and rewarding experience are all used effectively and delivered appropriately. In Midnight Special all these cinematic elements fit together perfectly; the acting, directing, script, pacing and music all complement each other perfectly.

For the entire one hour and fifty two minutes Nichols once again proves himself to be a true auteur that just gets cinema and how to tell a story the old fashioned way. Throughout the narrative Midnight Special is not only told in a purposeful and measured way, but also keeps its cards very close its chest throughout, only providing crucial snippets of information for the viewer both about Alton himself and the film’s other key characters. However we cannot help but treasure these snippets, and the fact we cannot help but truly care for the characters and are intrigued by the mystery that surrounds the narrative.

From how people react to Alton also allows the film to raise some interesting questions about the human condition; some see him as a threat and others, such as the religious extremists that he grew up with see him as a saviour. As with all of Nichols’ films, religion plays a key part in the narrative and its themes and once again the questions of the place of religion in society and the power it can have to make people act in extreme ways is examined with Nichols’ trademark intelligence and effective, believable subtlety. It is this intelligence in Nichols’ script that makes sure most characters never feel like unbelievable caricatures, and their actions and the motivations behind these actions are believable and therefore add integrity to the narrative.

What Alton actually is I will of course not reveal, and these are questions that are never fully answered, but either way the parental love and dedication his parents have for him is universal and not affected by the way he is, even if it means that they have to perform out of the ordinary acts. However unlike Victoria, the supposedly extreme acts feel more believable in context than that film of which was my last review. Indeed Midnight Special as the next film I saw at the cinema after Victoria does really put that film to shame as though one is unashamedly science fiction and one supposedly grounded in reality, ironically every development in Midnight Special convinced and always felt appropriate in context, unlike Victoria.

The performances too are excellent; Michael Shannon is of course in every Jeff Nichols film and the two of them obviously have a great understanding that brings out the best of both of them. Shannon did have only a minor (but still emotionally important) role in Nichols’ last film, but here returns as the leading role and once again delivers an emotionally complex performance as Alton’s father. Excellent support is also provided by Joel Edgerton, Kirsten Dunst, Adam Driver, Sam Shepard and Jaeden Lieberher as Alton himself. A special mention also has to go to Bill Camp, as for me he is one of the classic ‘him from that thing’ actors, but as always delivers an exceptional performance in a supporting, but crucial role.

Midnight Special does have a lot of characters, and though of course the focus of the film is always on Alton (and rightfully so) it not only allows Nichols to take a few narrative liberties, but also some characters do feel under developed. The character’s backstory, as with all elements of the narrative, is portrayed through subtle hints and snippets of dialogue, but it does mean some important questions about the main characters are left completely unanswered. Though this of course in keeping with the tone of the narrative, it does make the snippets of information about the characters frustratingly incomplete. The biggest victim of this is Joel Edgerton’s characters, though we are given some information, it does ultimately feel like his character is there simply because the story requires a third character to be going on the run with Alton. These are however minor quibbles, as ultimately Midnight Special (bizarre porn-film-esque title aside) is a film shrouded in genuine mystery and intrigue that only makes the most of its potential clichés and very familiar story to emerge as a genuinely engaging and satisfying drama.

Jeff Nichols uses his style to nail another genre; in isolation Midnight Special does admittedly offer very little originality, but thanks to Nichols’ trademark skilfully measured approach and the superb performances it is emotionally engaging sci-fi with a deep heart.