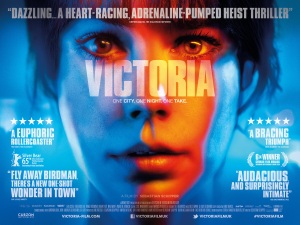 Young Spanish girl Victoria (Costa) has been living in Berlin for two months living a mundane, unfulfilling life working in a café. However, during a night out she meets Sonne (Lau) and his four friends and hangs out with them. However the night soon spirals out of control and turns potentially deadly as Victoria unwittingly helps them perform an armed robbery for a local gangster.

Anyone who is has even heard of this film will I am sure be very much aware of the fact that the entire 2hours and 18 minutes of Victoria is filmed in one continuous take, and where some films cheat a little with this notion (Birdman for example), as far as I am aware Victoria genuinely is in one take. Of course when a film is made with this creative choice it produces a huge risk and treads a fine line; it could potentially enhance the themes of the narrative or just feel like a distracting gimmick.

Many have used the word masterpiece when describing Victoria, and indeed if you were to describe this film to those who know me best they would undoubtedly say that it sounds like my kind of film. Well, as much as Victoria does indeed sound on the surface like ‘my kind of film’, it was a cinematic experience that I found overall to be mostly alienating, laborious, frustrating and nauseating.

Now, there is no getting away from the fact that Victoria is a very impressive technical achievement and Sebastian Schipper deserves and his crew deserve full praise for what they achieved, as do the entire cast for their exceptional performances. However, for all its impressive achievements, as a piece of cinematic storytelling Victoria only just works in my opinion, and I fear people have been blinded by the technical qualities of the film or just want to say they like it to make themselves sound cultured. Victoria takes a lot of effort to watch, and this is not rewarded enough to justify the effort the viewer has to put in.

The story itself certainly has enough potential and does indeed complement the stylistic choice of being in one take, but Schipper takes way too many narrative liberties, over emphasizes the film’s themes and gives us characters that it is impossible to like or care for (solely the fault of the script, not the performances), meaning the entire overall package of the film just does not work and the whole one-take element does ultimately feel like a gimmick.

As I said, there was potential here and the whole character of the protagonist and the life she has lead up to this point all makes sense, but it is rammed down the throat of the viewer to the point of being patronising. Despite the supposed protagonist journey, the decisions she makes are just too extreme and also contradict with the supposed realism the film is going for in terms of its style. Likewise, the real time element allows for a lot of naturalistic chinwag between the characters, and dialogue can most certainly be naturalistic while also offering substance and character development, but in Victoria it just does not ever make any of the characters interesting, sympathetic or likeable.

As the film enters the climactic final third it just borders on stupid and too extreme to the point that it almost becomes laughable. If by this point we had grown to really care about the characters and believe their situation it would be thrilling, but it is almost impossible to care. Characters can certainly be unlikable, but yet still interesting if written well, but none of the characters in Victoria are as they are all very two dimensional, in particular the protagonist who though has some kind of arc, her journey is way too ridiculous to have any kind of believability.

For me, Victoria is a perfect example of a film scoring some serious own goals with its dialogue and its narrative choices. If the naturalistic dialogue offered more substance and the characters were more fleshed out this would of course allow the director to take a few narrative liberties. However if the journey of the protagonist and the events of the final third were more subtle (but a big deal in the context of the narrative), then this could have complemented the style of the film and Victoria could have been an engaging drama of style and substance, but alas it is not.

While Victoria is undoubtedly a remarkable technical achievement and the cast are all excellent, it simply does not have the substance or story telling intelligence to complement its impressive style.