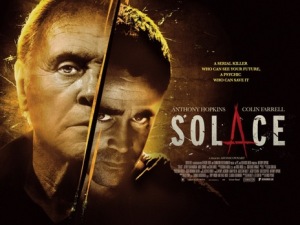 While on the case of a serial killer, FBI Agents Joe Merriweather (Morgan) and Katherine Cowles (Abbie Cornish) have nothing but dead ends, and so Merriweather calls upon the help of his friend and former colleague Dr John Clancy (Hopkins), who has lived in isolation for two years since the death of his daughter. Merriweather believes Clancy’s unique psychic abilities can help them catch the serial killer, and Clancy reluctantly agrees to help, however though Clancy is able to discover the identity of the killer as Charles Ambrose (Farrell), the killer too has psychic abilities far more powerful than Clancy’s, and therefore will always be at least one step ahead of him.

Often actors are accused of taking roles simply for the money, and sometimes that may be fair or unfair depending on that film and certain circumstances and contexts, but while watching Solace it is hard to believe that anything but the money was the sole motivation behind why they accepted these roles. Anthony Hopkins, Colin Farrell, Jeffrey Dean Morgan and Abbie Cornish are all good actors who I am sure can afford to be slightly picky with their roles, but while watching Solace it does feel that they surely did not even read the script for this drivel before saying yes. Though admittedly their ability to all keep straight faces throughout the film is bordering on a masterclass in acting, so maybe they knew how bad this film was from the off and wanted to test themselves? Probably not.

The film starts immediately by giving us two dictionary definitions of its title, and this usually serves as much of an ominous sign as bible quote being given. Now, don’t get me wrong, this can be deeply profound and effective for good films with depth and intelligence, but more often than not they are a warning sign for a film that lacks in equal measure both of those things. Well Solace most definitely lacks both depth and intelligence, as though it’s initial concept does have potential, it just becomes increasingly laughable and stupid, which is emphasised all the more by the films deadly serious and stoic presentation of its plot and ideas. There are also some potentially interesting and poignant themes within the plot, in particular the idea of death being a better alternative than a short life of extreme physical pain (which actually makes the title and its definitions very much appropriate), and how the motivations behind the murders can be linked to Hopkins’ characters own personal experiences. However this is all undermined by the incredibly stupid plot that just seems to make things up as it goes along and actually confuses itself, with its attempts at depicting the abilities of its two characters leading to it biting off way more than it can chew, which leads to a real anticlimactic, unsatisfying, predictable and laughable ending.

Once the identity of the killer is revealed (it is not a spoiler as Colin Farrell is on the poster!), we get to see the true abilities of Anthony Hopkins’ character, and John Clancy is basically Hannibal Lecter the Psychic Satnav! Science and logic aside, the idea of visually depicting the inside mind of a psychic is certainly interesting, but as Hopkins and Farrell try to out predict one another what is up to that point a passable (if clichéd and generic) crime thriller becomes a really silly film that does certainly venture into the old ‘so bad it is good’ territory. Indeed, in some ways this film has to be seen to believed, as the deluded stubbornness of the filmmakers to soldier on with their serious, moody tone provides some very unintentionally hilarious viewing.

Then there is the performances; well I just hope all four of the big name actors use their fees to fund some superbly creative art house projects, as they surely must be here solely for the money, or maybe forgot to read the script before saying yes. As said before, it does border on impressive that they all manage to remain so stoic will saying some of the script’s abysmal dialogue, but it only serves to further make the film unintentionally funny.

Jeffrey Dean Morgan, and in particular Abbie Cornish deliver solid enough performances in their roles, with Cornish’s performance deserving of a far better script and plot. Admittedly not even the performance of their lives would be able to elevate the abysmal dialogue and laughably silly plot, but Hopkins and Farrell’s performances do not help. Hopkins just puts in a performance that is a bad and clichéd impression of his trademark performances, with sloooooow delivery of dialogue and every sssyyyllllaaabbbllleee over emphasised way too much. This has certainly served him very well in the past, but with the dialogue being so silly it only serves to emphasise how ridiculous and laughable it all is. Meanwhile Colin Farrell, probably aware of how silly the plot is, overacts and chews scenery as if his life depended on it, with no actual conviction in any of the dialogue he says and making his character have as much intensity as that of a soft towel.

Though it may be sufficiently stupid to qualify as one of those ‘just got home from the pub’ films, Solace is too uncomfortable to watch because of just how deluded and downright stupid it is.

Admittedly a concept with some initial potential, but one that is completely destroyed with spectacular and laughable results; Solace starts off generic and descends into totally nonsensical stupidity.