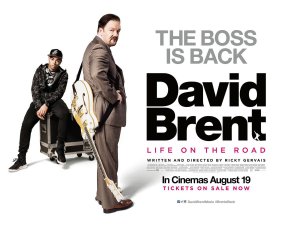 With all memories of his previous career as an office manager behind him, David Brent (Gervais) still has ambitions to be a rock star, and so employs a film crew to film his exploits as he tries to realise this dream by going on tour.

We all know that the film and television industries have a tendency to put greed over artistic integrity, hence why there is an abundance of remakes and sequels out there. We also of course get big screen adaptations of highly successful TV series or just films starring certain characters of these series that can potentially destroy all are memories of the character or series. These are often failures as the money making cynicism that is the sole motivation behind their existence means that no effort is put into the actual film, especially as feature length films generally have to have a different narrative structure. Often, it is the lazy attempt to incorporate the necessary change in narrative structure that leads to the film being a failure (For the example The Inbetweeners Movie’s attempts at this were lazy, clunky and downright embarrassing).

Well, Steve Coogan and co. proved that the small screen to big screen transition can be successfully, as Alan Partridge: Alpha Papa was in my view one of the funniest films of recent years. Well, there is a certain iconic status of The Office, and in particular the character of David Brent, so Ricky Gervais certainly faced quite a challenge when bringing David Brent to the big screen. However, love or him or loathe him as a person or actor, there is no denying that Ricky Gervais is a very intelligent writer, and is very much aware of the potential pitfalls, and on the whole he skilfully avoids them to make David Brent: Life on the Road one of the funniest films of the year. The first thing he has done that is obviously a very good idea is focus on David Brent, and move the character on.

Of course, the fact is that anyone who does not like The Office or Ricky Gervais (and I know there are a fair few) will not like this, however fans of him and his trademark style of cringe-inducing comedy will not be disappointed; For the entirety of its 96 minutes there are constant moments that are often hilarious and, of course, extremely cringe-inducing.

Another important element of both why not only a lot of the comedy works, but also that we the audience are able to engage with both the story and its protagonist is that, for all his many, many flaws David Brent is a very engaging and sympathetic character. Though of course there is the inevitable amount of exaggeration, David Brent still maintains the characteristics in The Office that made him genuinely believable, and therefore relatable on some levels. Even if we are not like him, we certainly have known people that are. Life on the Road cements David Brent as one of the great tragic fictional characters of recent times, and Gervais successfully manages perfectly the balance between Brent’s deluded stoicism and occasionally depressing realisation of who he actually is (as well who he isn’t).

Of course this being a feature length film, there has to be some kind of character arc or shift in the belief of certain key characters while others get their deserved comeuppance. In terms of David Brent and his band, Gervais handles this very well to provide developments in the final third that do work and are in-tune with the tone of the rest of the film and the character of David Brent. However, this also leads to elements that do not work and they do emphasize certain frailties with the film overall.

The main problem that this reveals is that it does seem quite clear that Gervais struggles to fill the feature length running time, and so there are certain subplots involving his work colleagues that feel forced and do not work. They just feel like they are included to not only fill the time, but also suit the structure of a feature length film. They also do serve to emphasise the narrative’s episodic structure. Of course the episodic structure of the film is emphasised by the fact the songs form most of the comic set pieces, however the songs themselves are technically very good, while the lyrics are of course predictably cringe-inducing, they are also good and do fit with the music very well.

However, though the film’s flaws may prevent Life on the Road from being a great film, they do not prevent it from being immensely enjoyable and often absolutely hilarious. The performances from Gervais and the predominantly unknown cast (another masterstroke from Gervais) are excellent and suitably naturalistic to fit perfectly with the film’s mock-documentary style. Of course, the film being made this way immediately makes it almost impossible to criticise it for not being cinematic. Well, with Cemetery Junction Gervais proved he can do cinematic, but having seen Life on the Road at the cinema, it certainly did not feel out of place, and was certainly one of my most genuinely entertaining cinema visits of 2016.

First Partridge, and now Brent makes a successful leap from the small screen to the big; David Brent: Life on the Road may certainly have a few narrative flaws, but it successfully keeps the style of observational and cringe-inducing humour that made The Office so funny and confirms David Brent as one of the most engaging, funny and ultimately tragic fictional characters of recent times.