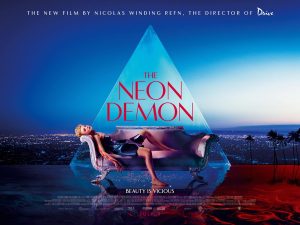 Shy 16-year-old Jesse (Fanning) moves to Los Angeles to pursue a career as a model. As Jesse finds increasing success she experiences not only the rewards that this industry can bring, but also experiences its far darker side as she soon faces the wrath of the embittered and jealous other models.

Throughout his career Nicolas Winding Refn, like a fair few other directors, has certainly very much made the films that he has wanted to make and the result is often very divisive films. There is certainly nothing wrong with this in theory, as it is often refreshing to see films that push boundaries and are not made to simply please the middle-of-the-road, lowest common denominator. The problem is with Nicolas Winding Refn, in my humble opinion, is that all of his English language films (except the excellent Drive) are total and utter self-indulgent, vacuous, infuriating piles of utter drivel, of which The Neon Demon is Refn’s worst film yet.

I know that many have praised this film in the same way they have Refn’s others; for its apparent style and the fact it apparently examines some dark themes. Well, yes I love purple too and, believe it or not, I was already aware of the fact that the fashion world is a little fickle and shallow. That is all the The Neon Demon has to offer, other than that it is a mind numbingly dull two hours that offers nothing other than total boredom for the viewer.

I also do not consider overlong static shots of people in dark rooms staring at one another as ‘great style’, even if there is a particularly distinctive use of purple or blue, and even if there is a bit of cannibalism and necrophilia involved (yes, really!).

The Neon Demon has been described by some as a horror, and I do get that, but even though it is intentionally very nasty at times and does go to some dark and messed up places, these are never horrifying or shocking. Firstly, we have to be slightly involved with a film or its characters to then be horrified (or at least it helps), but the moments that are apparently horrific are so stupidly over the top (and of course prolonged) that they would indeed be laughable if the film were not so infuriatingly boring.

If people like The Neon Demon, or any other films by Refn, and do genuinely get something out of them, then fair enough. After all, film is of course subjective and I am personally a huge fan of Lars Von Trier, and I know many are not for reasons similar to that of why I do not like Refn. However, there will also be many that will praise this film because they think it makes them sound clever, and that is both depressing and disappointing as we should all just call a spade a bloody spade!

The one and only good thing about The Neon Demon is the revelatory lead performance from Elle Fanning; she is incredible as Jesse, commanding the screen and perfectly portraying her single-minded ambition and naivety. Jena Malone is also very good as make-up artist who desperately seeks the beauty and attention of those around her. The performances from the rest of the cast are perfectly competent, though Keanu Reeves’ casting as an angry motel manager is just bizarre, and the point in the film at which I said to myself “oh look, its Keanu Reeves” was by far the most memorable moment.

The waste of Fanning’s superb performance also adds another level of frustration, to what is quite simply a waste of two hours. The Neon Demon is a film that offers absolutely nothing to the viewer; it has a very simple idea at its foundation (one of which anyone with an 8th of a brain will know already) and how boring the film’s depiction of this idea is, is genuinely beyond words. There needs to be at least a slight level of intelligence or substance (or even, dare I say it, enjoyment), but there is nothing on offer in The Neon Demon. Zoolander 2 offers a deeper and more effective insight into the fashion industry, and that was also rubbish. This film is very much a self-indulgent party taking place up Nicolas Winding Refn’s backside, and only he is invited.

Elle Fanning puts in the performance of her career, but it is sadly wasted due to being in one of the most painfully dull films of recent memory; Watching The Neon Demon is like staring into a dark void of nothing, for two painfully boring hours.