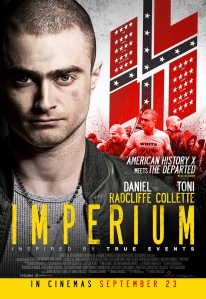 Eager to prove himself, a young idealist FBI agent (Radcliffe) goes undercover to infiltrate a white supremacist group that is allegedly plotting an act of terror.

Whenever you get a narrative of a protagonist going undercover and pretending to be someone they are not to ingratiate themselves to a certain group of people, certain obvious narrative tropes will occur, such as the inevitable moments when it looks as though our protagonist is about to rumbled. This can be a very effective way of producing cinematic tension, and though Imperium certainly has some moments of real, genuine tension, it just overall feels too much like a generic genre piece and with every narrative development, individual scene and even individual line if dialogue, words like ‘generic’ and ‘formulaic’ just come to mind.

Imperium is certainly a very well made and acted film, and has at its core some interesting and potentially topical themes. However, overall Imperium just feels way too neat and tidy to be anything more than watchable, and therefore overall quite forgettable, despite its initial potential. This is mainly down to some glaringly convenient narrative contrivances, and a slightly anti-climactic final third.

Much has been said about Daniel Radcliffe’s range as an actor, well my view is that he has proved himself to be a very good actor, but what seems to let him down is his natural accent. Radcliffe’s soft, middle-class English accent does seem to detract from any screen presence he may have, However, with Kill Your Darlings and Horns he proved that not only can he do a good American accent, but it just gives that extra element of screen presence to his performance. He of course lacks natural physicality, but that never stopped Tom Cruise, and though I don’t quite see Daniel Radcliffe being the next Tom Cruise, he is excellent and very convincing in Imperium.

Radcliffe’s performance is very much one the main reasons why Imperium is a film that is very watchable and at times genuinely tense. It is also important to remember that it is essentially a performance within a performance, but Radcliffe is very convincing, and it means that scenes where there is a sudden possibility that his character may get found out are genuinely tense. Thanks to his performance, we do care about him and do not want him to get found out. It is also very admirable to see an actor that has true freedom to pick his roles picking roles that provide a genuine challenge, and Radcliffe once again rises to this challenge.

The rest of the cast are also very effective; Toni Collette furiously chews gum, and at the same time the scenery, as Foster’s superior, but she does it very well. Meanwhile the supporting cast are excellent in their narratively vital roles. Even if the narrative path of Devin Druid’s character is almost painfully clichéd and predictable.

However, it is the increasingly generic narrative that often depletes our engagement with both the protagonist and the story as it gets increasingly generic, while also seeming to take annoyingly blatant narrative liberties. Like so many films, Imperium seems to have a check list of narrative developments that it feels obliged to tick off. This unfortunately produces a genuinely anti-climactic final third where everything becomes painfully predictable, and the supposed final climactic set piece lacks any real tension or drama. While key characters are conveniently very disposable, whereas in a more effective narrative they could have been less disposable and provided a far more uncertain and intense final third.

Despite a great central performance and an initial promising start, thanks to its generic narrative Imperium gradually falls into the trap of contrivance and cliché to emerge as a perfectly watchable, but ultimately forgettable genre piece.

An extremely passionate and (semi) opened minded film reviewer, with a hint of snobbish.
View all posts by MoodyB →
This entry was posted in All Film Reviews and tagged Daniel Radcliffe, drama, entertainment, film, film review, movie review, Toni Collette. Bookmark the permalink.