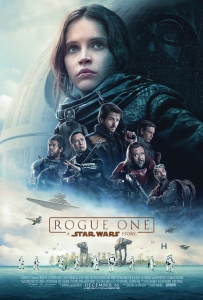 Ever since being separated from her father as a child, Jyn Erso (Jones) has lived a rebellious existence, but with no cause to fight for. However, after her father Galen (Mads Mikkelsen), the lead engineer on the Empire’s new weapon that can destroy planets, sends a coded message regarding its destruction, Jyn joins a motley crew of fighters from the rebel alliance in a dangerous mission to steal the plans for this weapon and destroy it.

So, another year passes and we have another festive release of a Star Wars film. However, while The Force Awakens of course told the next chapter of the saga, in a way that was great fun, but also rather similar to A New Hope, well now we go back in time to the events that essentially set some elements of the story to A New Hope in motion. It was certainly a bold choice, as most us already know how it all ends, and the abundance of re-shoots initially suggested that all involved were having a few problems trying to figure out how to actually tell it.

Well, director Gareth Edwards is quoted as saying that he wanted Rogue One to be a war film, and its narrative structure of a motley crew of various characters taking part in what appears to be a suicide mission is very much reminiscent of films like The Dirty Dozen. However, despite this very promising initial premise, Rogue One is not quite the thrilling, rip-roaring action epic that it wants to be, thanks mainly to a fair few storytelling problems.

Rogue One is certainly a very enjoyable and watchable action romp, but it is just not as emotionally involving as it should have been, so is ultimately rather forgettable. There is just a total lack of disciplined balance when it comes to the plot and the characters; the plot itself takes way too long to get going, with way too much plot strands and planet-hopping at the beginning. Some individual scenes and moments are rushed through too quickly and casually, while others are drawn out for way too long. The result is that Rogue One can be quite a slog to watch at times.

The biggest problem is however the characters; in an attempt to give us the usual clichéd mixture of characters so that all boxes are ticked we get just too many new characters introduced, and all of them feel rather bland and forgettable. Though all the performances are perfectly fine and each one does get their individual moment to shine, they are all just very bland, whether that be the rebels or Ben Mendelsohn’s disappointingly forgettable Director Krennic. This despite the scripts admirable attempts to blur the lines between good and evil, where the rebels commit questionable acts for the greater good. However, as with everything else, the script just does not go far enough.

Contrivance and cliché is almost a character itself in Star Wars films, but despite Felicity Jones’ solidly stoic performance, her protagonist’s arc is just too contrived, conventional and predictable to truly engage with her character and route for. This indeed goes for the entire group of characters, there is not a strong enough feeling of camaraderie between them all.

The general consensus does seem to be that the best character in the film is a robot; Alan Tudyk’s K-2SO, a re-programmed imperial droid who has a tendency to just tell it how it is gets all the funniest lines in a film distinctly lacking in warmth and humour. Meanwhile the other most memorable characters are particularly familiar; Thanks to some superb CGI, Grand Moff Tarkin is still as menacing as before, while Darth Vader only gets a few scenes, but one in particular is certainly a standout. While the less about Forest Whitaker’s Saw Gerrara, the better!

Though it may just lack what it takes to be a great film in terms of storytelling, once we get to the inevitable big action finale, Gareth Edwards certainly delivers. Though this whole sequence does at times feel overlong and repetitive, there are some superb sequences. Edwards generally achieves a good balance between the aerial battles in space and the more physical battles down on the ground. Some of the action sequences on the beaches are thrilling and highly visceral scenes that are generally thrilling to watch. All of this is accompanied by Michael Giacchino’s wonderful score. I said in my review of Jupiter Ascending that I thought he would be the natural successor to the almost irreplaceable John Williams, and he delivers the goods with a thrilling score that uses William’s original themes effectively, but also delivers as a great score on its own terms with new themes.

Despite some stunning moments in its final third, there is still an overall feeling that everything is just a little too formulaic in terms of the narrative, and this does lead to an overall lack of tension and an ultimate sense of anti-climax. This is irrespective of the fact that most people will know the ultimate ending from the outset. If done property, this could have made Rogue One even more emotionally involving, but despite being a perfectly and entertaining blockbuster romp, it does ultimately feel like a wasted opportunity.

Though it certainly delivers some stunning action sequences and is overall very entertaining, its lack of memorable or engaging characters and slightly ill-disciplined storytelling means Rogue One is a good film, but not the great film that it could have been.