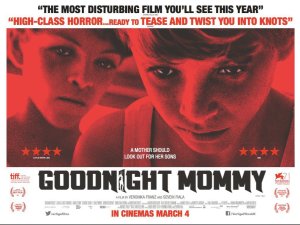 One summer inseparable young twins Lukas (Lukas Schwarz) and Elias (Elias Schwarz) welcome home their mother (Wuest) to their idyllic house in the countryside to recover from cosmetic surgery. Her face still bandaged up, she is distant and her demeanour is aggressive and temperamental, leading to the boys questioning whether she is actually their mother. As the boys test this it leads to horrifying consequences and revelations.

Of course mainstream horror films these days are predominantly generic, lazy, formulaic, predictable and laughable tripe, and (perhaps this is narrow minded of me) if Goodnight Mommy were a mainstream American film directed by the likes of James Wan I would probably avoid it. However as it is foreign and therefore in my opinion is likely to be far less cynical and all those other aforementioned derogatory words than a mainstream horror, I made the effort to see it. Well, it gives me enormous pleasure to be proved right (it doesn’t happen that often), as though Goodnight Mommy is admittedly not perfect, it is vastly superior to most of the drivel that the mainstream has to offer.

Goodnight Mommy has received comparison to the films of Michael Haneke, but that is because this film is in German (though it is actually Austrian) and rather intense, and most people know any other comparison to use, so use this to make themselves sound intelligent. Well, Goodnight Mommy certainly employs the same bleak and unforgiving ideology that can be found in some of Haneke’s films, but should be judged on its own merits.

For me the best horror is psychological and not just about prolonged silence and loud bangs, and writer/ directors Severin Fiala and Veronika Franz have crafted an intentionally restrained, atmospherically repressive psychological chiller that will haunt and disturb long after the film has finished.

Goodnight Mommy is a film that contains many secrets and revelations, and Fiala and Franz skilfully make sure that the audience has to pay attention and often only cryptic clues are included in the plot. It is a film that is not easy viewing at times and is intentionally slow paced at the beginning, but though it certainly tests the patience and resolve of the viewer, this is amply rewarded. There is an inescapably repressive, claustrophobic and foreboding atmosphere that dominates the entire narrative, and Fiala and Franz skilfully capture this perfectly without ever having to resort to cheap gimmickry.

From its intentionally slow paced opening third, Goodnight Mommy reveals plot secrets very gradually, and this only produces a bleaker atmosphere and story. There are some plot revelations that are perhaps on the more obvious side, but how they are shown gives them far more integrity than a vast majority of mainstream films. For me atmosphere is so crucial in films of this genre, and Goodnight Mommy contains within it an atmosphere of dark secrets, but though it is obvious they exist, it is revealed very slowly exactly what these secrets are. Childhood innocence also plays a huge role in this film, and the juxtaposition of this with some of the film’s dark developments makes for some extremely uncomfortable and deeply haunting viewing, especially as some of it is told in an almost fairy tale-like way.

Goodnight Mommy is also stunningly put together; the often static or slow panning shots adding to repressive atmosphere and Martin Gschlacht’s superb cinematography captures the beauty of the film’s setting, but despite the fact this film is set in the summer, the film’s bleak pallet makes it feel cold, which only enhances the emotionally cold and unforgiving narrative.

The two child actors are excellent, and the fact they are both actual twins also places a huge role in the viewer’s experience of the film, as at times we are not sure if we are watching Lukas or Elias. This is also plays a part in the many themes the film examines, such as mental health and trauma and the devastating and irreparable effects this can have on a close relationship between two people, even one that should be as indissoluble as a mother-son relationship.

Admittedly Goodnight Mommy is not without its problems; it seems that the film makers do sometimes struggle to fill the time and an entire sequence involving charity workers coming to the house achieves nothing and does question the film’s validity. Likewise it asks more questions than it can ever even attempt to answer, but it does not only cause some serious debate (the best films do), but suggests that repeat viewings will yield further revelations and answers.

A haunting and unforgettable depiction of cinematic tension; Goodnight Mommy is positively drenched in repressive and unforgiving atmosphere that tests both the patience and intelligence of the viewer, but in a very good way.

An extremely passionate and (semi) opened minded film reviewer, with a hint of snobbish.
View all posts by MoodyB →
This entry was posted in All Film Reviews, The Best of 2016, World Cinema and tagged entertainment, film, film review, foreign films, movie review, world cinema. Bookmark the permalink.